Antiquities of Samarkand. Madrasah of Nadir Divan-Begi, Congregational Mosque (Friday Mosque). Inscriptions of the Inner Niche of the Main Entry Above a Window

1868
This photograph of the mosque at the Nadir Divan-Begi Madrasah in Samarkand (Uzbekistan) is from the archeological part of Turkestan Album. The six-volume photographic survey was produced in 1871-72 under the patronage of General Konstantin P. von Kaufman, the first governor-general (1867-82) of Turkestan, as the Russian Empire’s Central Asian territories were called. The album devotes special attention to Samarkand’s Islamic architectural heritage. Located next to the Khodzha Akhrar shrine, this madrasah (religious school) was completed in 1631 by Nadir Divan-Begi, vizier to the Bukharan ruler Imam-Quli Khan. The madrasah was planned as a rectangular courtyard with a mosque at one end. A monumental iwan (vaulted hall, walled on three sides, with one end open) arch occupies the center of the main facade of the mosque. This view shows the upper part of the wall within the niche formed by the iwan arch. At the center is the pointed tip of the portal arch (peshtak), surrounded by polychrome faience work in an intricate floral design. Above the arch is a horizontal inscription in Perso-Arabic script within a grid design. These segments are bordered by decorative strips with floral motifs. Within the peshtak arch, whose surface is covered with floral patterns, is the tip of a lattice window above the portal. This rich array of ceramic ornamentation no doubt was intended to suggest the entrance to the Garden of Paradise. 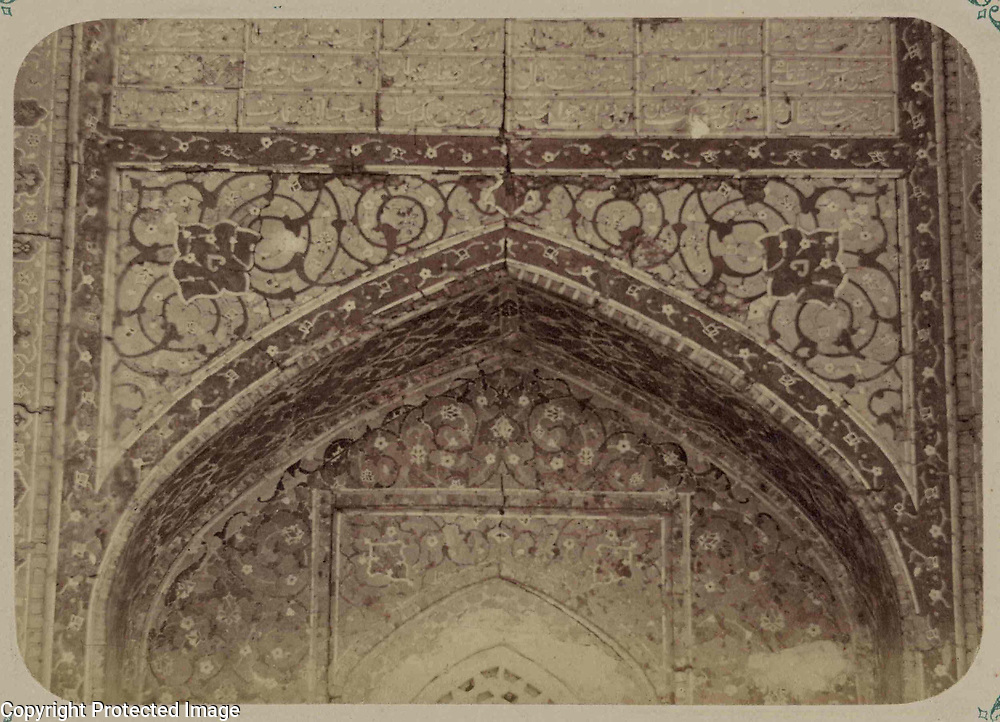