1868
These sketches of polychrome ceramic ornaments at the main mosque of the Bibi Khanym ensemble in Samarkand (Uzbekistan) are from the archeological part of Turkestan Album. The six-volume photographic survey was produced in 1871-72 under the patronage of General Konstantin P. von Kaufman, the first governor-general (1867-82) of Turkestan, as the Russian Empire’s Central Asian territories were called. The album devotes special attention to Samarkand’s Islamic architecture, such as 14th- and 15th-century monuments from the reign of Timur (Tamerlane) and his successors. Built in 1399-1405 with the spoils of Timur’s campaign in India, the Bibi Khanym ensemble was the location of the city’s main, or Friday, mosque, named in homage to Timur’s senior wife, Sarai Mulk Khanym. The ensemble centers on the mosque, one of the world’s largest. L.A. Shostak made watercolor copies of ceramic details from the mosque facades. Shown here are (clockwise from top): a tetrafoil ornament with floral motifs; a hexagonal pattern with floral motifs radiating from a central point; a five-pointed star with floral motifs; a ten-pointed star with tendrils radiating from a five-pointed star (on the facades of the minarets at the main mosque). In the center is a tile with block Kufic letters. Although simplified, such sketches gave information unavailable in photography of that period. 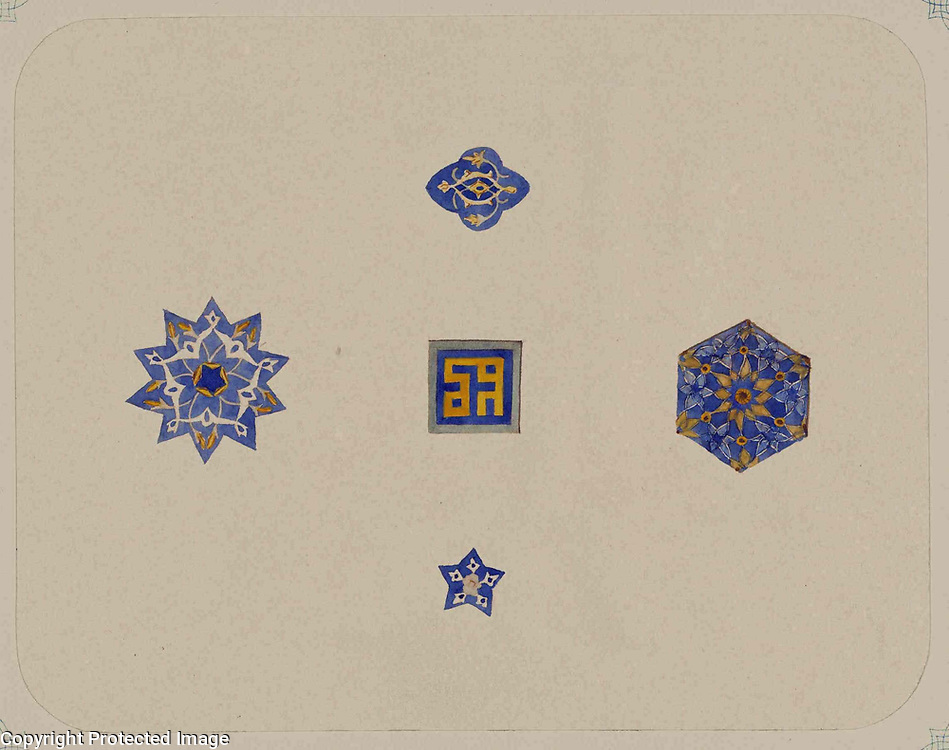