The Battle of Mazandaran from "Hamzahnamah"

1564
This large-scale painting depicts the Battle of Mazandaran, an event in the Persian romance of the mythical adventures and battles of Amir Hamzah, the uncle of the Prophet Muhammad, recorded in the famous Hamzahnamah (Book of Hamzah). The Hamzahnamah was begun around 1564 under the sponsorship of the Mughal emperor Akbar (ruled 1556‒1605) and was completed in approximately 15 years. This painting is number 38 in the seventh volume of the Hamzahnamah, as inscribed between the legs of the man in the bottom center. It depicts a battle scene in which the protagonists Khwajah ʻUmar and Hamzah, nicknamed Sahib Qiran (Owner of the Epochs), and their armies engage in a fierce battle. Originally, the faces were depicted, subsequently erased by iconoclasts, and repainted in more recent times. Only the face of the groom wearing an orange turban in the center of the left edge has been left untouched. Immediately above this figure, a soldier in a studded gold tunic has a disjointed face, revealing how an old border was removed and faces retouched. Approximately 50 painters worked on the project under the supervision of the famous artists Mir Sayyid ʻAli and ʻAbd al-Samad, who both had worked circa 1522‒35 on the royal Shahnamah of the Safavid ruler Shah Tahmasp. Although a number of the paintings are linked to specific artists, this particular one does not bear an attribution mark. The large-scale text panel on the verso describes the Battle of Mazandaran. The text is executed in black nastaʻliq script on a large beige sheet of paper that bears substantial water damage. The last three lines also exhibit the crowded writing that is seen frequently in the manuscript as the scribe or scribes struggled to fit the complete the narrative account on each text page. 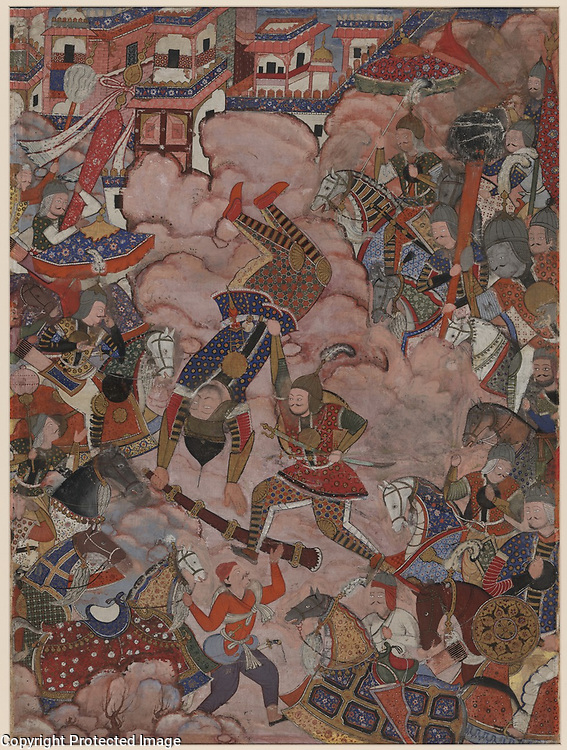