Outside View of the Passage of the Dead, from the Left. Samarkand

1905
he Shah-i Zindah (Persian for “living king”) necropolis is located at the outskirts of Samarkand. Situated on an ancient burial ground, it is revered as a memorial to Kusam-ibn-Abbas, a cousin of the Prophet Muhammad. Although the photographer’s caption is imprecise, this view appears to show the northeast corner of a small madrasah built in 1812–13 by Davlat Kushbegi on the east side of the darvozakhana (main entrance) to Shah-i Zindah. The adobe brick wall on the left has glazed inserted ornaments. The corner is covered with polychrome tiles in geometric patterns that frame a wide vertical band of block Kufic script forming words from the Kalima, the basis of the Shahada, or Islamic declaration of faith. The dome in the background appears to be that of the Toglu Tekin (Emir Hussein) Mausoleum. The image is by Russian photographer Sergei Mikhailovich Prokudin-Gorskii (1863–1944), who used a special color photography process to create a visual record of the Russian Empire in the early 20th century. Some of Prokudin-Gorskii’s photographs date from about 1905, but the bulk of his work is from between 1909 and 1915, when, with the support of Tsar Nicholas II and the Ministry of Transportation, he undertook extended trips through many different parts of the empire. In 1911 his travels took him to Samarkand (present-day Uzbekistan), where he devoted special attention to monuments of Islamic architecture. 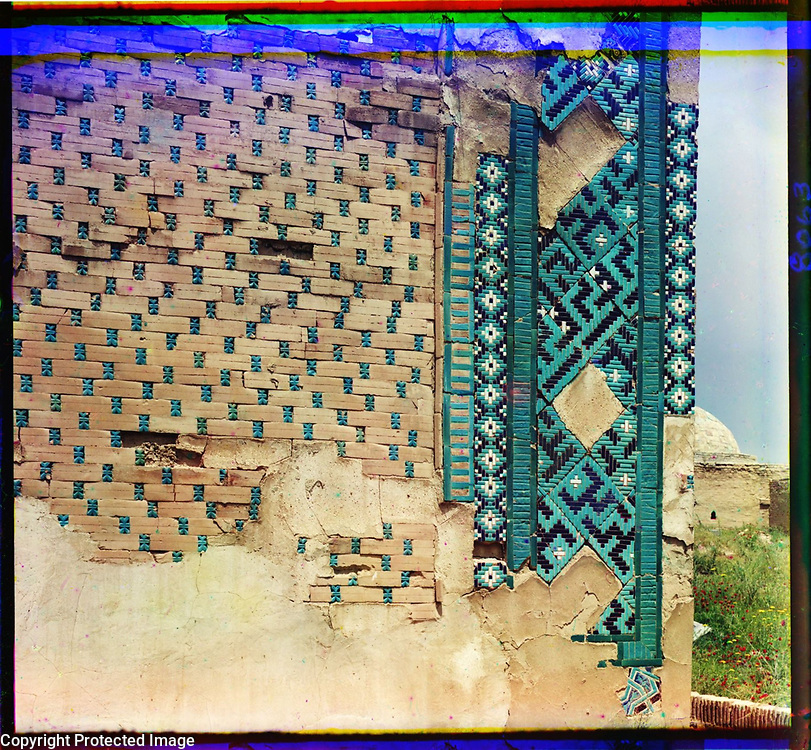