Antiquities of Samarkand. Tomb of the Saint Kusam-ibn-Abbas (Shah-i Zindah) and Adjacent Mausoleums. Mausoleum of the Daughter of Emir Khodzha Toglu Tekin. View of the Facade

1865
This photograph of the Tuman-Aka mausoleum within the Shah-i Zindah necropolis in Samarkand is from the archeological part of Turkestan Album. The six-volume photographic survey was produced in 1871-72 under the patronage of General Konstantin P. von Kaufman, the first governor-general, in 1867-82, of Turkestan, as the Russian Empire’s Central Asian territories were called. The album devotes special attention to Samarkand’s Islamic architecture, such as 14th- and 15th-century monuments from the reign of Tamerlane and his successors. Of particular note is Shah-i Zindah (Persian for “living king”), revered as a memorial to Kusam-ibn-Abbas, a cousin of the Prophet Muhammad. The Tuman-Aka mausoleum and mosque were built in 1405 as a memorial to the youngest wife of Tamerlane and are located to the left of the chartak in the northern cluster of shrines. This view of the mausoleum, taken over the broken parapet of the chartak, also includes a corner of the adjacent mosque facade (on the far left), as well as the Khodzha Akhmad mausoleum (on the right). The mausoleum facade is defined by a high arch (peshtak) that frames a niche containing the portal. Its mosaic panels, with floral, geometric, and inscriptional patterns, represent the apogee of architectural ceramics in this region. The arch culminates in “honey-comb” (mocárabe) decorative vaulting. 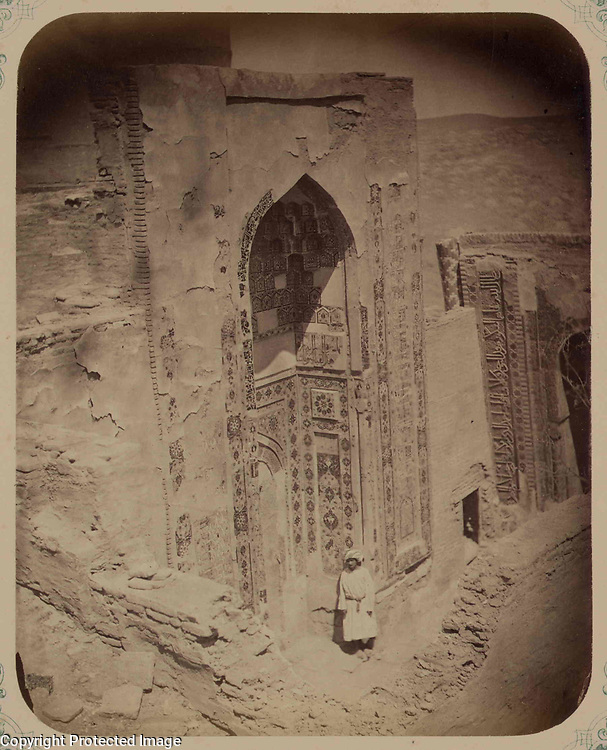