1865
This photograph of the Kusam-ibn-Abbas memorial ensemble in the northern cluster of shrines at the Shah-i Zindah necropolis in Samarkand is from the archeological part of Turkestan Album. The six-volume photographic survey was produced in 1871-72, under the patronage of General Konstantin P. von Kaufman, the first governor-general (1867-82) of Turkestan, as the Russian Empire's Central Asian territories were called. The album devotes special attention to Samarkand’s Islamic architecture, such as 14th- and 15th-century monuments from the reign of Timur (Tamerlane) and his successors. Shah-i Zindah (Persian for “living king”) is revered as a memorial to Kusam-ibn-Abbas, a cousin of the Prophet Muhammad. This south view of the group of structures dedicated to the “living king” includes a mosque and minaret (on left) dating from the mid-15th century. On the right is the mausoleum complex, including a ziaratkhana (1334) for ritual prayers and the gurkhana, or mausoleum proper (right foreground), which contains the grave of the saint and may have been built as early as the 12th century. The undecorated brick walls in the back of the complex give a clear view of the domed structures themselves. In the foreground are rectangular marble sarcophagi as well as brick mounds for subsequent burials near the sacred site. The entire ensemble is bolstered by a retaining wall. 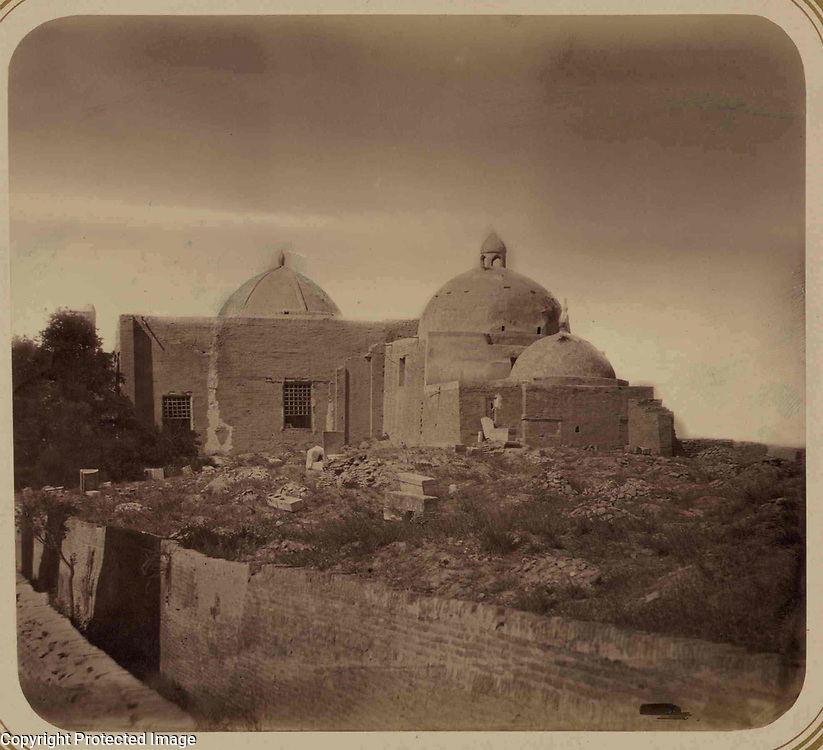