1868
This plan, section, and elevation of the Shir Dar Madrasah in Samarkand (Uzbekistan) is from the archeological part of Turkestan Album. The six-volume photographic survey was produced in 1871-72 under the patronage of General Konstantin P. von Kaufman, the first governor-general (1867-82) of Turkestan, as the Russian Empire’s Central Asian territories were called. The album devotes special attention to Samarkand’s Islamic architecture, such as 14th- and 15th-century monuments from the reign of Timur (Tamerlane) and his successors. In the center of Samarkand is the Registan ensemble, composed of three major examples of a madrasah (religious school). The earliest Registan madrasah was built in 1417-20 by the scholar-king Ulugh Beg, grandson of Timur. The second example, the Shir Dar Madrasah, was built in 1619-36, during the Bukhara Ashtrakhanid dynasty. The form of this madrasah is typical for Central Asia: an imposing portal (iwan, or vaulted hall, walled on three sides, with one end open) leads to a rectangular courtyard enclosed by a two-story arcade containing rooms for some 100 students. The rectangle was bounded by four minarets and four ribbed domes over instruction halls at the corners. On the opposite side from the portal is a domed mosque. Each of the four sides has an arched portal covered with ceramic work. Although Shir Dar and its minarets sustained damage in this active seismic zone, the structure was relatively well preserved. 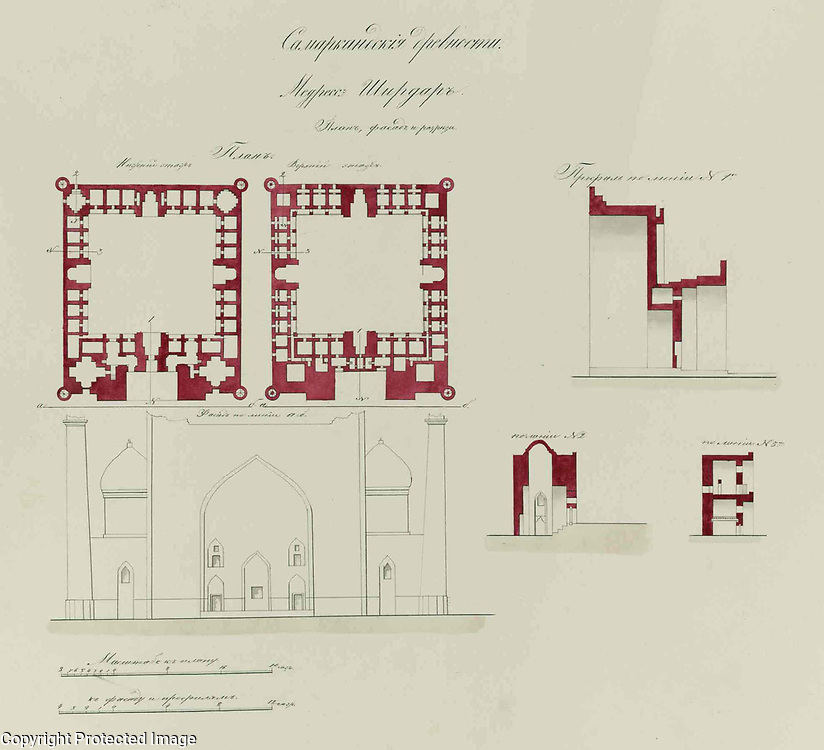