Antiquities of Samarkand. Madrasah of Bibi Khanym. Congregational Mosque. View of the Marble Reading-Stand for the Qurʼan inside the Mosque

1868
This photograph of a marble Qurʼan holder at the main mosque of the Bibi Khanym ensemble in Samarkand (Uzbekistan) is from the archeological part of Turkestan Album. The six-volume photographic survey was produced in 1871-72 under the patronage of General Konstantin P. von Kaufman, the first governor-general (1867-82) of Turkestan, as the Russian Empire’s Central Asian territories were called. The album devotes special attention to Samarkand’s Islamic architecture, such as 14th- and 15th-century monuments from the reign of Timur (Tamerlane) and his successors. Built in 1399-1405 with the spoils of Timur’s campaign in India, the Bibi Khanym ensemble was the location of the city’s main, or Friday, mosque, named in homage to Timur’s senior wife, Sarai Mulk Khanym. The ensemble centers on the mosque, one of the largest in the Islamic world. Pictured here is the enormous carved marble Qurʼan holder (rihal) within the mosque. Public readings from the Qurʼan play an essential role in worship, and the form of the rihal (or lau) would assume special importance in a mosque of this size. Marble appeared frequently in Timurid structures after the Indian campaign, and its use here signified the centrality of the Qurʼan, which would have been of dimensions appropriate to the size of the marble stand. Visible in the background is an arched niche covered with ceramic work. 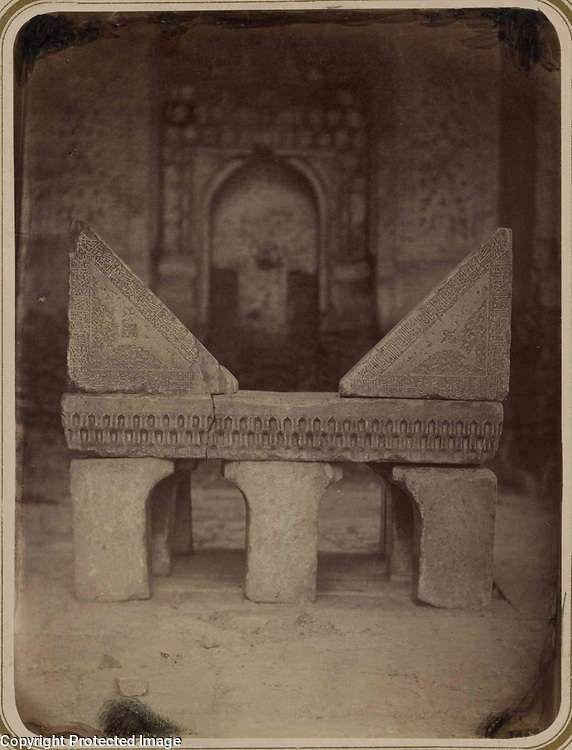