Full-Length Profile Portrait of a Woman, Possibly Turkman or Kirgiz, Standing on a Carpet at the Entrance to a Yurt, Dressed in Traditional Clothing and Jewelry

1911
This photograph shows a young married woman of the Teke ethnic group, near the Murgab Oasis in the region of Bayramaly (present-day Turkmenistan). Settlements along the Murgab River and the city of Merv (now Mary) were annexed by the Russian Empire in 1884. The woman’s festive attire includes a patterned robe and elaborate headdress. Her shoulders are draped with strings of beads. She stands on a woven carpet at the entrance to a kibitka (wattle yurt) made from reeds. The ribs of the frame under the felt cover are visible above the decorated door lintel. The image is by Russian photographer Sergei Mikhailovich Prokudin-Gorskii (1863–1944), who used a special color photography process to create a visual record of the Russian Empire in the early 20th century. Some of Prokudin-Gorskii’s photographs date from about 1905, but the bulk of his work is from between 1909 and 1915, when, with the support of Tsar Nicholas II and the Ministry of Transportation, he undertook extended trips through many different parts of the empire. Prokudin-Gorskii was particularly interested in recently acquired territories of the Russian Empire such as Turkestan (present-day Uzbekistan and neighboring states), which he visited on a number of occasions, including two trips in 1911. Turkestan appealed to him not only for its Islamic architecture but also for examples of traditional culture. 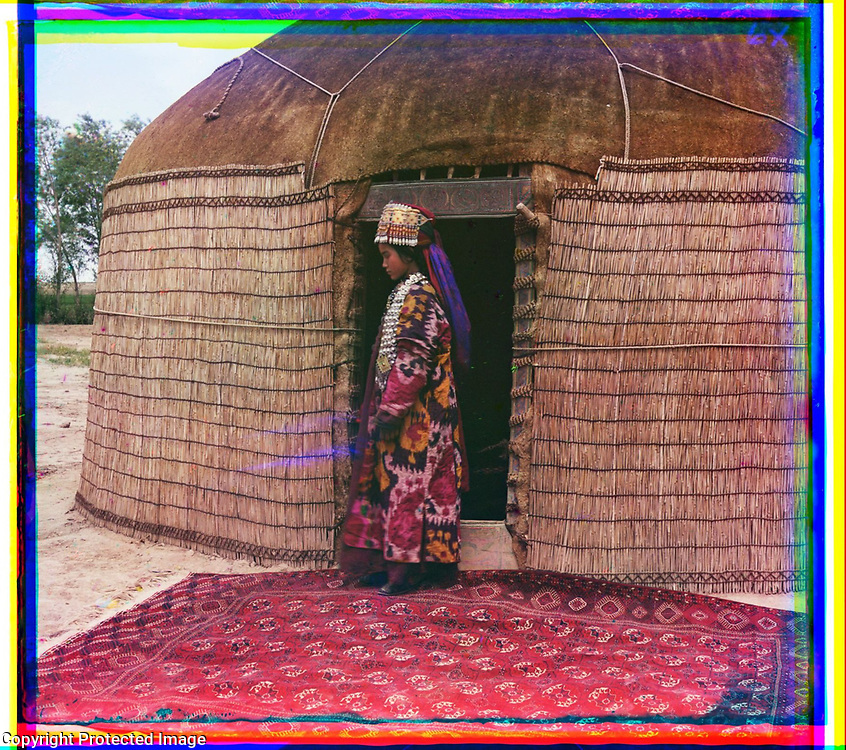