Syr-Darya Oblast. Ruins of the City of Sauran. Taken in 1866

1866
This photograph of ruins from the city of Sauran, located in the southern part of present-day Kazakhstan, is from the archeological part of Turkestan Album. The six-volume photographic survey was produced in 1871-72 under the patronage of General Konstantin P. von Kaufman, the first governor-general (1867-82) of Turkestan, as the Russian Empire’s Central Asian territories were called. The caption notes that the photograph was taken in 1866, which predates the photography undertaken specifically for the album. Sauran (also known as Savran) was some 40 kilometers from the city of Yasi (present-day Turkestan, Kazakhstan), and was reputed to be an important point on the Silk Road. In the 14th century it became the capital of the regional Ak Orda (White Horde), and at the time was known for its ceramic tile production. (Ak means “white” and, in the traditional Turkic naming of cardinal compass points, corresponds to “south”; the other cardinal directions are Kok, meaning “blue” or “east”; Qizil, “red” or “west"; and Qara, “black” or “north.”) The brick minarets on hilly terrain in the photograph show signs of major damage, but they remain standing. The tower on the right in particular seems without a sufficient base. The exterior wall of the tower is in fact a shell that encloses a spiraling stairway, and the core of the tower is still relatively intact. The left tower still has its superstructure, visible above the flared stalactite culmination of the main shaft. The figure on the left gives a sense of the scale of the towers. 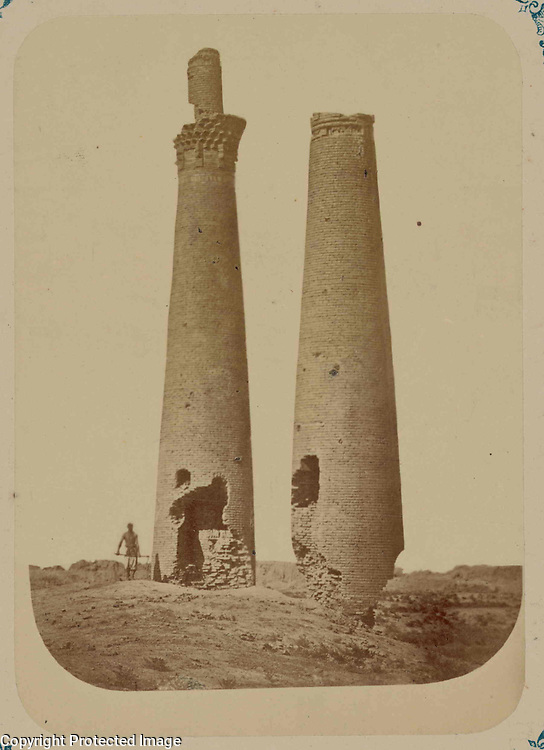