Antiquities of Samarkand. Tomb of the Saint Kusam-ibn-Abbas (Shah-i Zindah) and Adjacent Mausoleums. Mausoleum of Shirin Bika. Inscription on the Right Side

1865
This watercolor sketch of a facade detail from the Shirin Bika Aka Mausoleum at the Shah-i Zindah necropolis in Samarkand (Uzbekistan) is from the archeological part of Turkestan Album. The six-volume photographic survey was produced in 1871-72, under the patronage of General Konstantin P. von Kaufman, the first governor-general (1867-82) of Turkestan, as the Russian Empire's Central Asian territories were called. The album devotes special attention to Samarkand’s Islamic architecture, such as 14th- and 15th-century monuments from the reign of Timur (Tamerlane) and his successors. Of particular note is the Shah-i Zindah (Persian for “living king”) ensemble, revered as a memorial to Kusam-ibn-Abbas, a cousin of the Prophet Muhammad. The Shirin Bika Aka Mausoleum was built in 1385-86 for Timur’s younger sister and is considered one of the great achievements of Timurid art. Its design centers on a main arch, or peshtak, which contains the portal and is covered in profuse ceramic tile ornamentation. The fragment reproduced in this sketch consists of a glazed inscription panel with white cursive Thuluth letters on a polychrome background. It appears to be located on the upper part of the inner right facade of the arch. Although simplified, such watercolor sketches conveyed color information and details unavailable through the photography of that period. 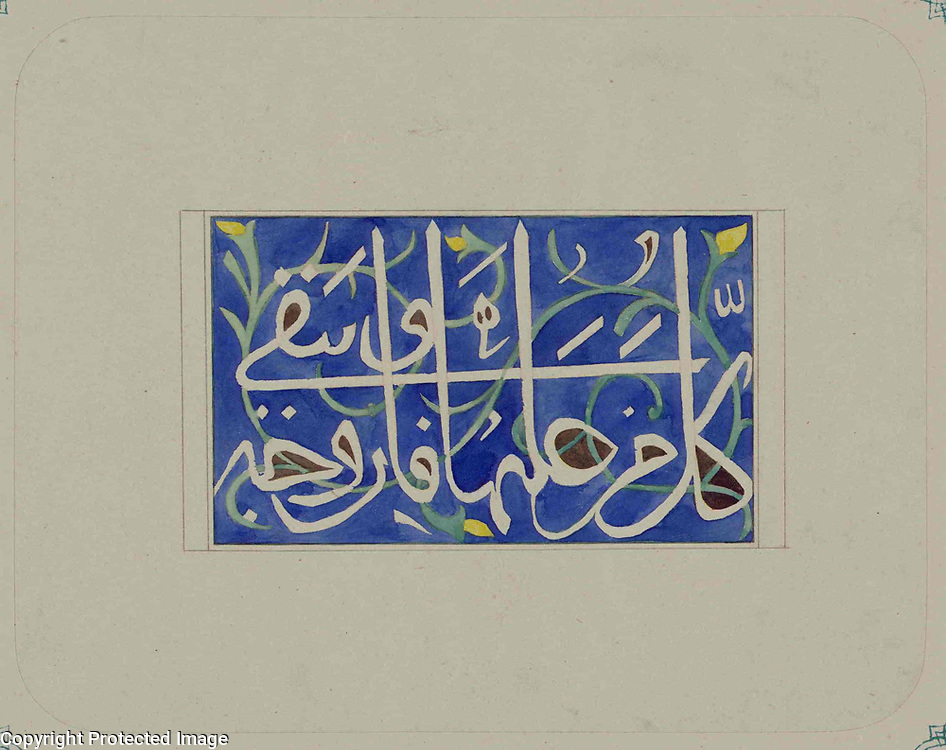