Antiquities of Samarkand. Shir Dar Madrasah. Built by Yalanktush Bagadur, Vezir to Imam-Quli Khan in 1648 (1058 Hegira). View of the Main Facade (Western Side)

1868
This photograph of the Shir Dar Madrasah in Samarkand (Uzbekistan) is from the archeological part of Turkestan Album. The six-volume photographic survey was produced in 1871-72 under the patronage of General Konstantin P. von Kaufman, the first governor-general (1867-82) of Turkestan, as the Russian Empire’s Central Asian territories were called. The album devotes special attention to Samarkand’s Islamic architecture, such as 14th- and 15th-century monuments from the reign of Timur (Tamerlane) and his successors. In the center of Samarkand is the Registan ensemble, composed of three major examples of a madrasah (religious school). The second madrasah in the ensemble, the Shir Dar, was built in 1619-36, during the Bukhara Astrakhanid dynasty. Shown here is the main facade, centered on the iwan (vaulted hall, walled on three sides, with one end open) and displaying one of the most spectacular facades in Central Asia. The name means "habitat of lions,” a reference to the two rampant beasts of prey on either side of the arch. (They seem to resemble tigers.) Within the back of each beast is a humanoid face representing the spirit of the heraldic beast. The facade is flanked by two minarets also covered with ceramic decoration. At the corners near the minarets are ribbed domes arising over instruction halls. Although Shir Dar sustained damage in this active seismic zone, the structure was relatively well preserved. 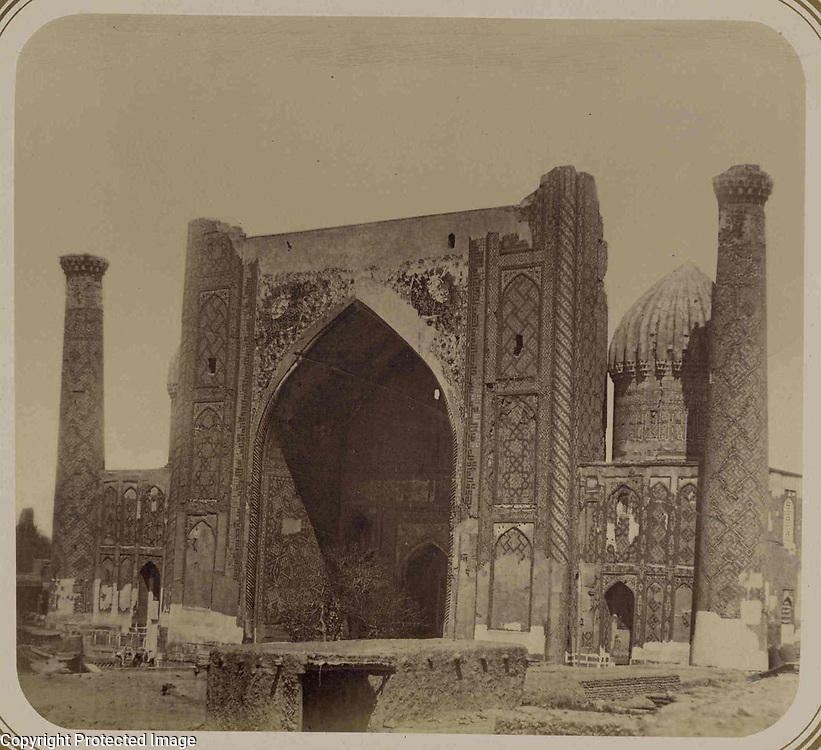