Antiquities of Samarkand. Mausoleum of the Emir Timur Kuragan (Gur-Emir). Decorations on the Main Entry Niche

1868
his photograph of ceramic work on the entrance arch to the courtyard of the Gur-Emir mausoleum in Samarkand (Uzbekistan) is from the archeological part of Turkestan Album. The six-volume photographic survey was produced in 1871-72 under the patronage of General Konstantin P. von Kaufman, the first governor-general (1867-82) of Turkestan, as the Russian Empire’s Central Asian territories were called. The album devotes special attention to Samarkand’s Islamic architectural heritage, including Gur-Emir (Persian for “tomb of the ruler”). Although known primarily as the burial place of Timur (Tamerlane), Gur-Emir was begun by Timur in 1403 to commemorate the death of his beloved grandson Muhammad Sultan at the age of 27. When Timur was buried there in 1405, Gur-Emir became the mausoleum of the Timurids. Shown here is the upper part of the facade within the iwan (vaulted hall, walled on three sides, with one end open) niche of the entrance structure. The horizontal band at the bottom is composed of a row of vertical faience panels containing radiant polychrome floral motifs. The panels are capped with pointed arches leading to an intricate pattern of ceramic tiles set within a geometric lattice. The right corner shows remnants of a vault structure known as mocárabe--also referred to as a “stalactite” vault because of the appearance of the suspended decorative elements. The upper corner shows the underlying brick wall. 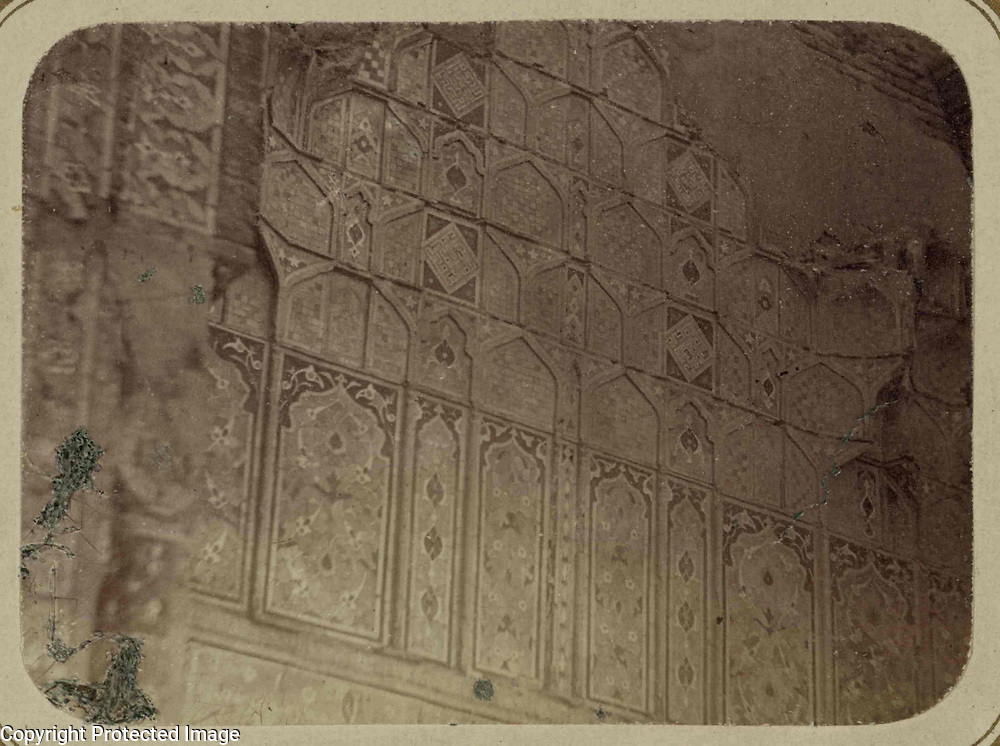