1905
Among the greatest examples of Islamic art in Samarkand is the Gur-Emir ("tomb of the ruler") complex. The shrine was begun by Timur (Tamerlane) in 1403 in memory of his grandson Muhammad Sultan. Following Timur's own death in 1405, his body was placed in the structure, which became the Timurid Mausoleum. It was completed by another of Timur's grandsons, the astronomer-king Ulugh Beg. Shown here is a facade detail within the arch of the main entrance structure. The rich polychrome ceramic work in a Persian style includes geometric and floral motifs, as well as a faience panel with a Thuluth (cursive) inscription. Above is a horizontal inscription band with tendril figures. The inscription identifies the builder as Muhammad-ibn-Mahmud from Isfahan. Visible through the arch is the arcaded wall of the mausoleum itself. The image is by Russian photographer Sergei Mikhailovich Prokudin-Gorskii (1863–1944), who used a special color photography process to create a visual record of the Russian Empire in the early 20th century. Some of Prokudin-Gorskii’s photographs date from about 1905, but the bulk of his work is from between 1909 and 1915, when, with the support of Tsar Nicholas II and the Ministry of Transportation, he undertook extended trips through many different parts of the empire. In 1911 he made two trips to an area of Central Asia then known as Turkestan (present-day Uzbekistan and neighboring states), where he photographed monuments of Islamic art. 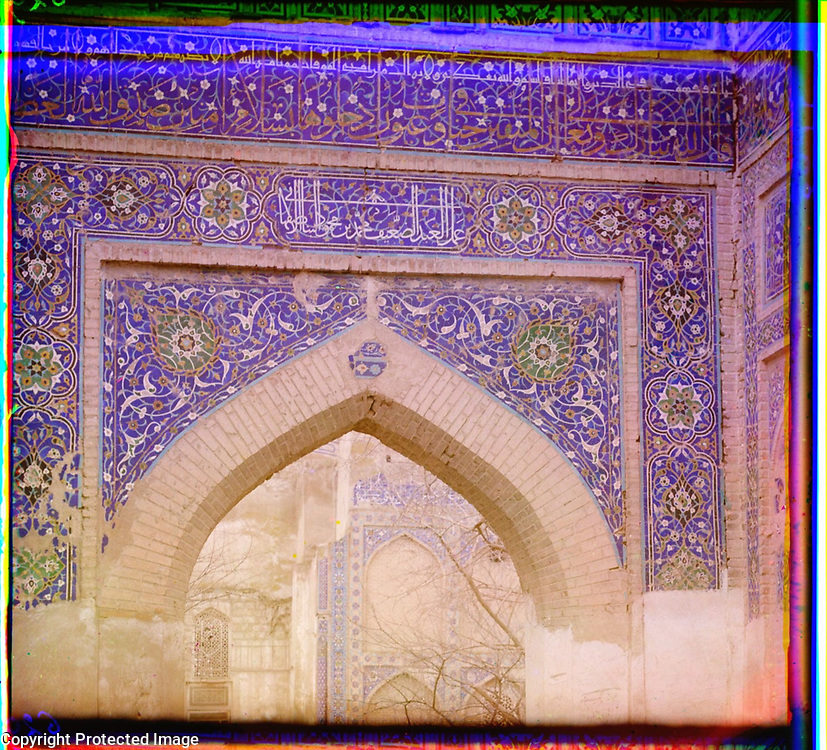