1905
This photograph shows two fruit vendors at their stalls in one of Samarkand’s markets. Wearing a white turban and colorful striped robe, the vendor in the foreground is surrounded by carefully arranged piles of fruit. Among them are lemons, pomegranates, and several types of apple. On the left is a woven basket filled with white eggs. In the foreground are flat baskets with dried fruit and raisins. Some of the fruit was grown locally, but produce could also be imported via Samarkand’s important rail link. Suspended in the background are clusters of Russian sushki—hard, baked rings of dough, often consumed with tea. The image is by Russian photographer Sergei Mikhailovich Prokudin-Gorskii (1863–1944), who used a special color photography process to create a visual record of the Russian Empire in the early 20th century. Some of Prokudin-Gorskii’s photographs date from about 1905, but the bulk of his work is from between 1909 and 1915, when, with the support of Tsar Nicholas II and the Ministry of Transportation, he undertook extended trips through many different parts of the empire. He was interested in recently acquired territories of the Russian Empire such as Turkestan (present-day Uzbekistan and neighboring states), which he visited on a number of occasions, including two trips in 1911. Turkestan appealed to him not only for its Islamic architecture but also for scenes of local life in places such as Samarkand. 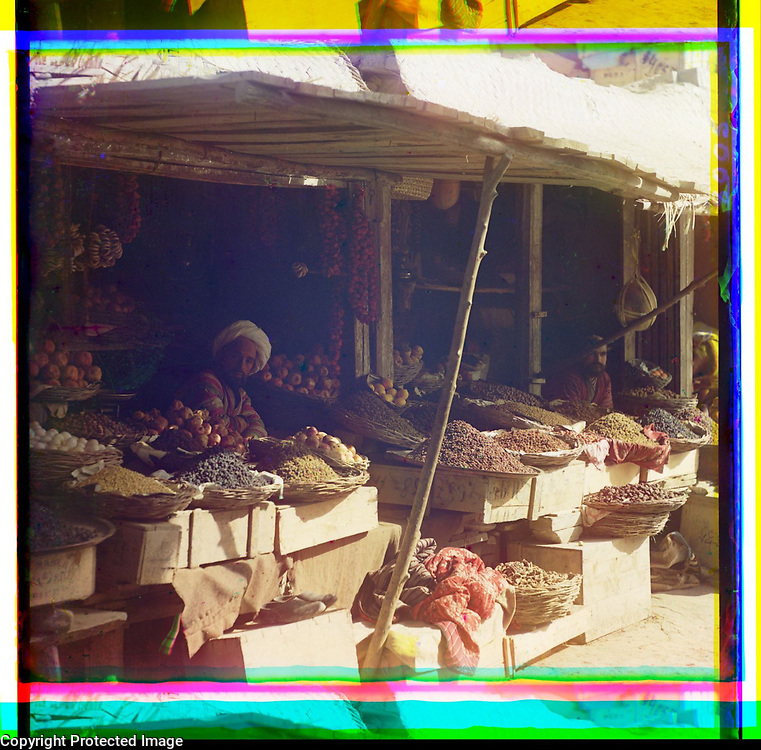