1865
This photograph of the carved door leading to the Kusam-ibn-Abbas mosque in the Shah-i Zindah necropolis in Samarkand is from the archeological part of Turkestan Album. The six-volume photographic survey was produced in 1871-72 under the patronage of General Konstantin P. von Kaufman, the first governor-general, in 1867-82, of Turkestan, as the Russian Empire’s Central Asian territories were called. The primary compilers for the visual material in the archeological volumes were Aleksandr L. Kun, an Orientalist attached to the army, and Nikolai V. Bogaevskii, a military engineer. They devoted special attention to Samarkand’s Islamic architecture, such as 14th- and 15th-century monuments from the reign of Tamerlane and his successors. Of particular note is Shah-i Zindah (Persian for “living king”), revered as a memorial to Kusam-ibn-Abbas, a cousin of the Prophet Muhammad. This elaborately ornamented door, carved of elm and originally with ivory inlay, leads from a chartak (a covered chamber on a necropolis passageway) to the mosque and mausoleum dedicated to Kusam-ibn-Abbas. An inscription reveals that the door was made in 1404-05 by the master Yusuf Shirazi. The ensemble beyond the door includes a khanaka, or pilgrims’ lodge, for the veneration of the saint. The door is flanked by ceramic work, including faience panels with floral motifs. 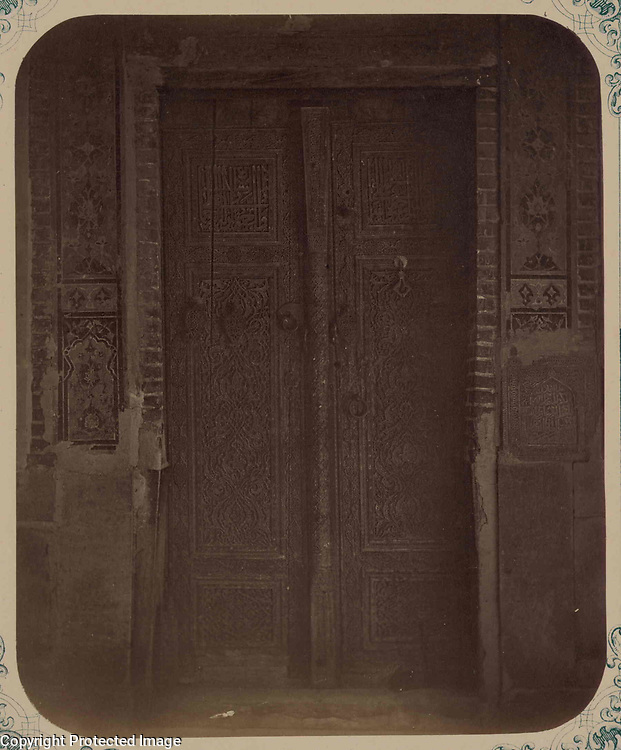