Display of Embroidered Cloth and Pouches

1915
Torzhok is among the oldest settlements in central Russia. Referred to in written sources as early as 1139, it is situated on the Tvertsa River, some 60 kilometers to the west of Tver. Its favorable location made it a place of active commerce (the name Torzhok comes from the word for trading site). After the founding of Saint Petersburg in 1703, Torzhok saw a revival of its fortunes, as the town became a transfer point for supplies moving to the new imperial capital. By the turn of the 19th century, Torzhok had become a center of provincial Russian culture and crafts, including gold embroidery—a craft that continues in Torzhok to this day. Shown here is decorative work including floral motifs, peacock feathers, and birds, as well as a small drawstring pouch with tassels and an embroidered fish. The photograph was taken in 1910 in the Gold Embroidery Workshops. The image is by Russian photographer Sergei Mikhailovich Prokudin-Gorskii (1863–1944), who used a special color photography process to create a visual record of the Russian Empire in the early 20th century. Some of Prokudin-Gorskii’s photographs date from about 1905, but the bulk of his work is from between 1909 and 1915, when, with the support of Tsar Nicholas II and the Ministry of Transportation, he undertook extended trips through many different parts of the empire. 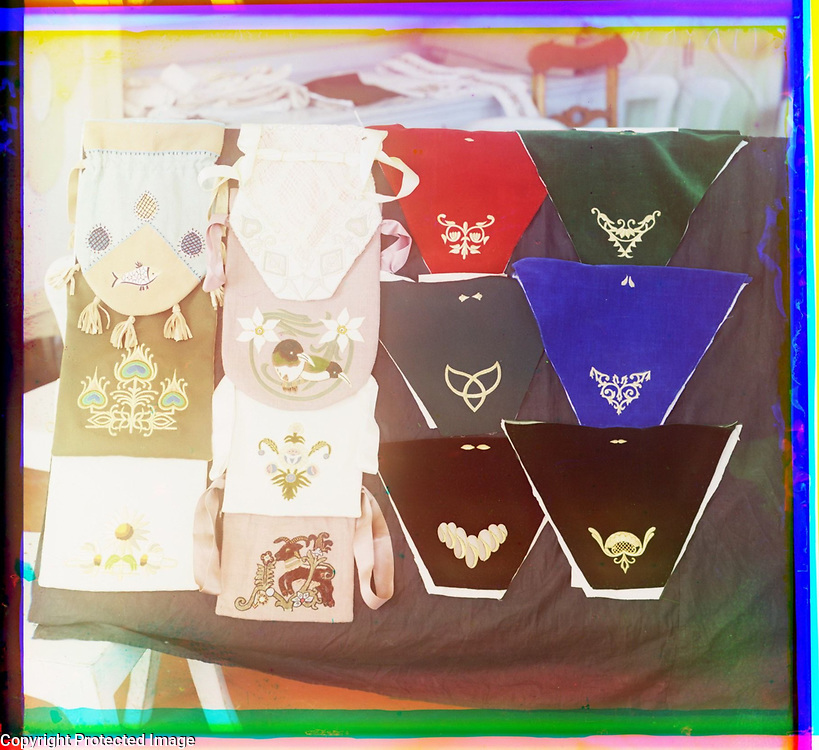