Antiquities of Samarkand. Tomb of the Saint Kusam-ibn-Abbas (Shah-i Zindah) and Adjacent Mausoleums. Mausoleum of Emir Kutuluk Turdi Bek Aka. Detail of the Upper Section on the Entry Arch

1865
This photograph of the entrance arch to the Shadi Mulk mausoleum at the Shah-i Zindah necropolis in Samarkand is from the archeological part of Turkestan Album. The six-volume photographic survey was produced in 1871-72 under the patronage of General Konstantin P. von Kaufman, the first governor-general, in 1867-82, of Turkestan, as the Russian Empire’s Central Asian territories were called. The album devotes special attention to Samarkand’s Islamic architecture, such as 14th- and 15th-century monuments from the reign of Tamerlane and his successors. Shah-i Zindah (Persian for “living king”) is revered as a memorial to Kusam-ibn-Abbas, a cousin of the Prophet Muhammad. The mausoleum of Shadi-Mulk Aka was built in 1372 for the burial of Uldjai Shadi-Mulk, the daughter of Tamerlane's elder sister, Kutlug-Turkan-Aka. This view shows the point of the arch that frames a niche containing the portal. The arch and niche are covered with ceramic work, including majolica tiles and rosettes, faience mosaics, Arabic script in the cursive Thuluth style, and the “honey-comb” (mocárabe) form at the top of the niche. The niche is framed by carved, glazed terracotta columns. The basic colors are dark blue and turquoise. The shadow obstruction at the top indicates that the photograph was taken through the portal of the opposite mausoleum (Shirin-Bika-Aka). 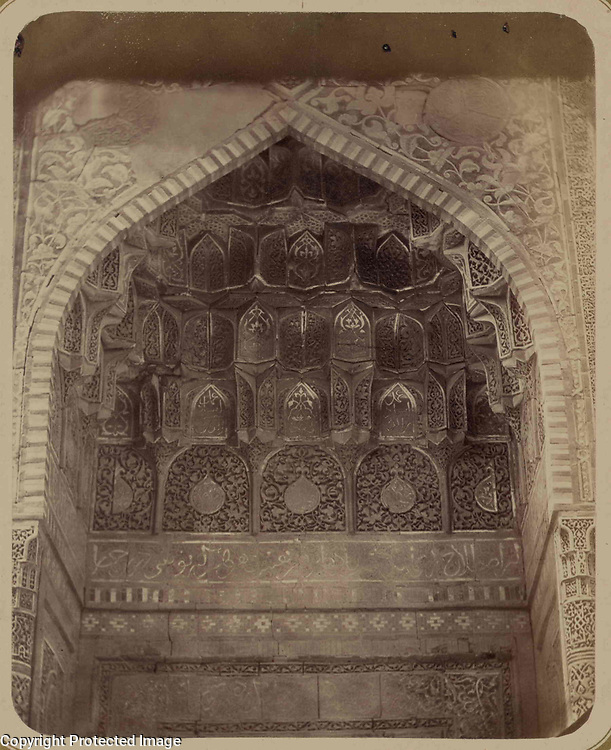