In the Courtyard of a Sart Home. On the Outskirts of Samarkand

1905
The caption identifies this house as belonging to a Sart, a term used in the previous century to refer to town dwellers, as well as to inhabitants of this area before the coming of Uzbek tribes in the 16th century. This courtyard view of a suburban villa shows elements of Western construction in the brickwork, the window design, and the roof cornice. Also prominent are traditional decorative elements, such as the wooden columns that support the cornice and the ceramic panels above the French doors. Although not identified, the owner of a house this imposing, with a mixture of local and Western elements, presumably belonged to the local elite and was in favor with the Russian administration. The image is by Russian photographer Sergei Mikhailovich Prokudin-Gorskii (1863–1944), who used a special color photography process to create a visual record of the Russian Empire in the early 20th century. Some of Prokudin-Gorskii’s photographs date from about 1905, but the bulk of his work is from between 1909 and 1915, when, with the support of Tsar Nicholas II and the Ministry of Transportation, he undertook extended trips through many different parts of the empire. He was interested in recently acquired territories of the Russian Empire such as Turkestan (present-day Uzbekistan and neighboring states), which he visited several times. During two winter trips, in January 1907 and February 1911, he photographed scenes of local life in Samarkand. 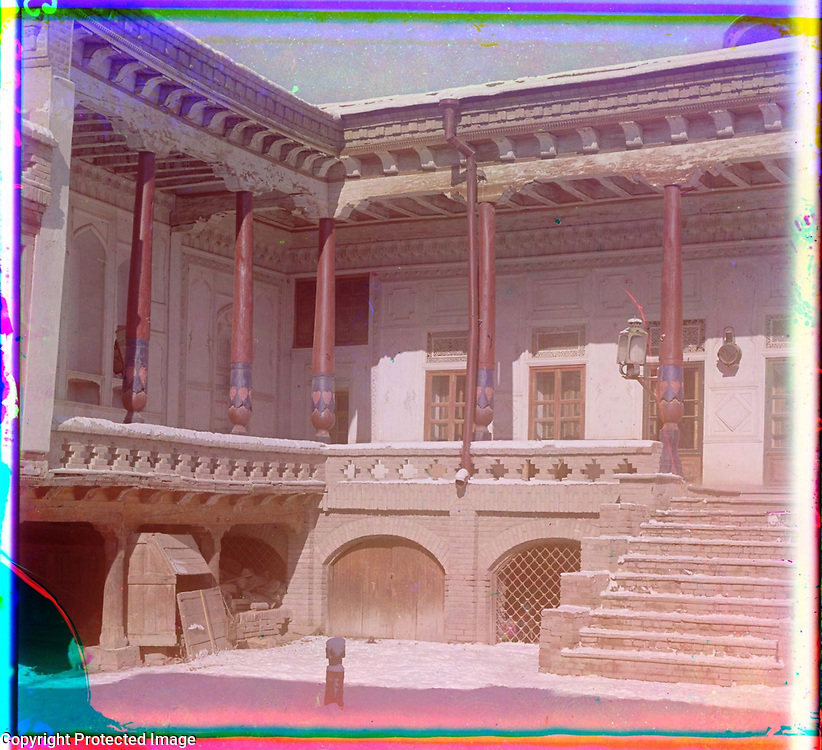