1905
Between 1785 and 1920, eight emirs of the Manghit dynasty ruled Bukhara (in present-day Uzbekistan). After the Russian occupation of Samarkand (1868), the Emirate of Bukhara became a Russian protectorate. The last emir of Bukhara was Said Mir Mohammed Alim Khan. The small palace seen here is the emir’s suburban residence at Shir-Budun near Bukhara. The facade reflects a crude 19th-century attempt to apply loudly painted decorative motifs to a structure influenced by European design. The European influence is particularly noticeable in the window forms. Only the thin corner towers display the level of ceramic work typical of Bukhara’s great architecture. The image is by Russian photographer Sergei Mikhailovich Prokudin-Gorskii (1863–1944), who used a special color photography process to create a visual record of the Russian Empire in the early 20th century. Some of Prokudin-Gorskii’s photographs date from about 1905, but the bulk of his work is from between 1909 and 1915, when, with the support of Tsar Nicholas II and the Ministry of Transportation, he undertook extended trips through many different parts of the empire. Prokudin-Gorskii was interested in recently acquired territories of the Russian Empire such as Turkestan, which he visited on a number of occasions, including trips in 1907 and 1911 to the ancient city of Bukhara. Prokudin-Gorskii also photographed the emir of Bukhara, Said Mir Mohammed Alim Khan, in 1911. 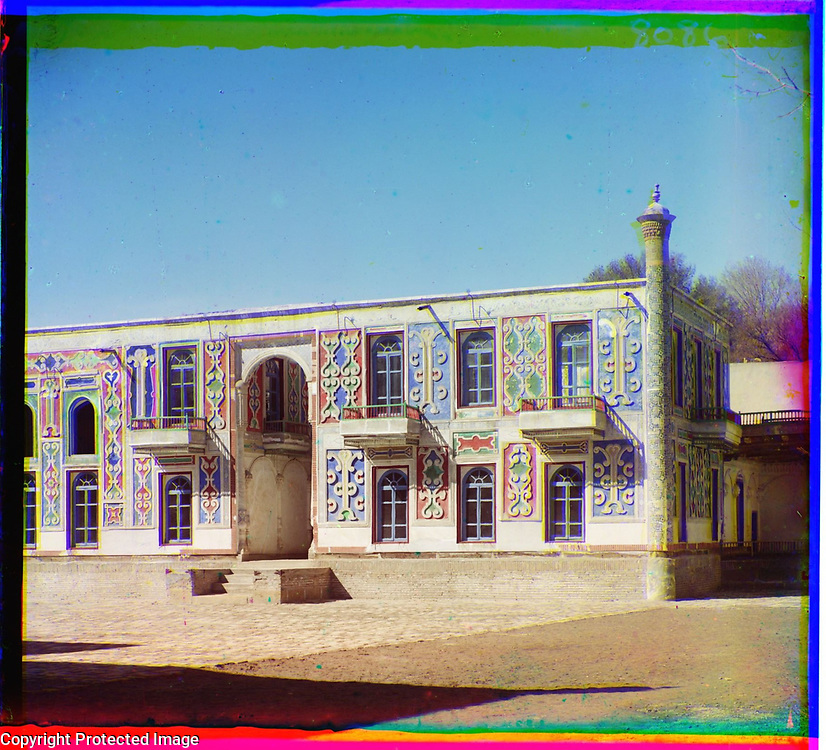