Wall and Column above Shir-Dar. Samarkand

1905
In the center of Samarkand is the Registan complex, consisting of three madrasah (religious schools). The second of these, the Shir-Dar Madrasah, was built in 1619–36 during the Bukhara Astrakhanid dynasty. This view from the parapet of the two-story structure shows a section of the side of the main facade, which contains the great iwan arch. The surface seen here is covered in geometric patterns formed by simple azure and blue glazed tiles. The attached column at the left corner displays geometric tile figures within which are patterns of block Kufic script forming words from the Kalima, the basis of the Shahada, or Islamic declaration of faith. In the left background is the facade of the Ulugh Beg Madrasah. The image is by Russian photographer Sergei Mikhailovich Prokudin-Gorskii (1863–1944), who used a special color photography process to create a visual record of the Russian Empire in the early 20th century. This close-up photograph on a high ledge would have required much effort, as Prokudin-Gorskii’s camera with tripod was large and unwieldy. Some of Prokudin-Gorskii’s photographs date from about 1905, but the bulk of his work is from between 1909 and 1915, when, with the support of Tsar Nicholas II and the Ministry of Transportation, he undertook extended trips through many different parts of the empire. During a trip in 1911 he gave special attention to photographing the Islamic architecture of Samarkand (present-day Uzbekistan). 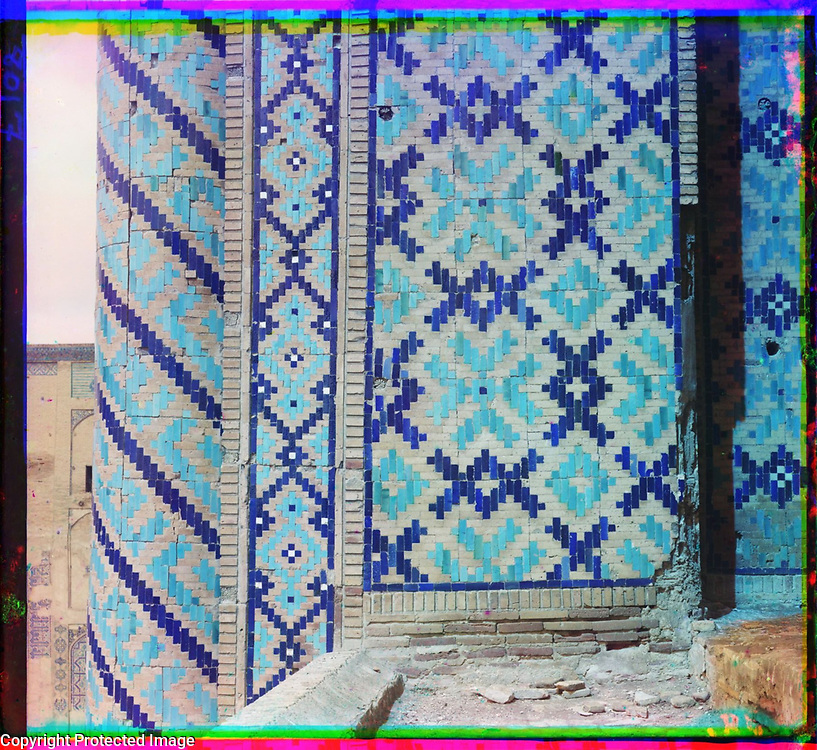