Kush-Medrese (Interior from the Right Side). Bukhara

1905
A distinctive feature of the Islamic architecture of Bukhara (in present-day Uzbekistan) is the kosh madrasah, consisting of two religious schools facing each other. Shown here is the courtyard of the Abdulla-khan Madrasah, built in 1588-90 by Abdulla-khan II (1534–98), the last effective ruler of the Sheibanid dynasty. The basic plan consists of a two-story structure enclosing a rectangular courtyard, each side of which is centered on a major iwan (arch). Seen here is the iwan on the right side from the main entrance. Despite significant losses, the facade shows an elaborate array of ceramic work, including intricate geometric and floral patterns. At the top is a large Perso-Arabic inscription band in the Thuluth cursive style. On either side are rooms for scholars. The image is by Russian photographer Sergei Mikhailovich Prokudin-Gorskii (1863–1944), who used a special color photography process to create a visual record of the Russian Empire in the early 20th century. Some of Prokudin-Gorskii’s photographs date from about 1905, but the bulk of his work is from between 1909 and 1915, when, with the support of Tsar Nicholas II and the Ministry of Transportation, he undertook extended trips through many different parts of the empire. In 1911 his travels took him to an area of Central Asia then known as Turkestan, where he photographed the ancient monuments of Bukhara. 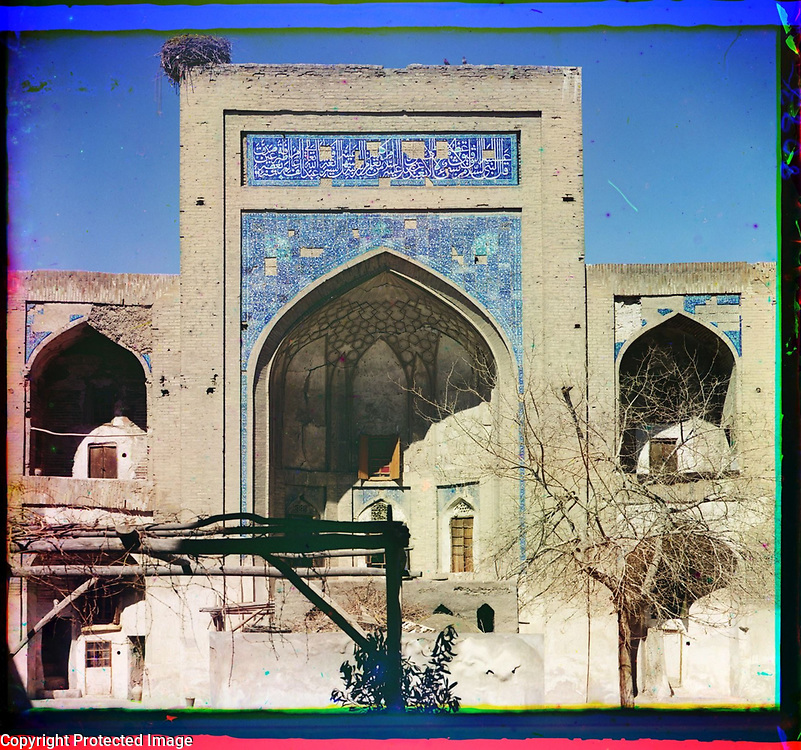