Syr-Darya Oblast. City of Turkestan. Main Niche in the Mausoleum Leading to the Tomb of Saint Sultan Akhmed Iassavi

1865
This photograph of the interior of the mausoleum of Khodzha Ahmed Iassavi in Yasi (present-day Turkestan, Kazakhstan) is from the archeological part of Turkestan Album. The six-volume photographic survey was produced in 1871-72 under the patronage of General Konstantin P. von Kaufman, the first governor-general (1867-82) of Turkestan, as the Russian Empire’s Central Asian territories were called. Yasi is associated with the Sufi mystic, Khodzha Ahmed Iassavi (1103-66), whose great reputation led Timur (Tamerlane) to construct a memorial shrine (khanaka) at his grave site. Built in 1396-98, the mausoleum displays features of Timurid architecture, then at its height in Samarkand. This view of the interior of the main structure shows the arched niche leading to the grave of the saint. The basic plan of the mausoleum is cruciform. Above the portal are bands of polychrome ceramic tiles. The niche culminates in an elaborate honey-comb (mocárabe) vault, also referred to as a stalactite vault in reference to the suspended decorative elements. Although the walls show some damage, the structure appears intact. The figure in prayer at the entrance gives an idea of the monumental scale of the mausoleum. Dimly visible on the left is the bronze ritual water basin. 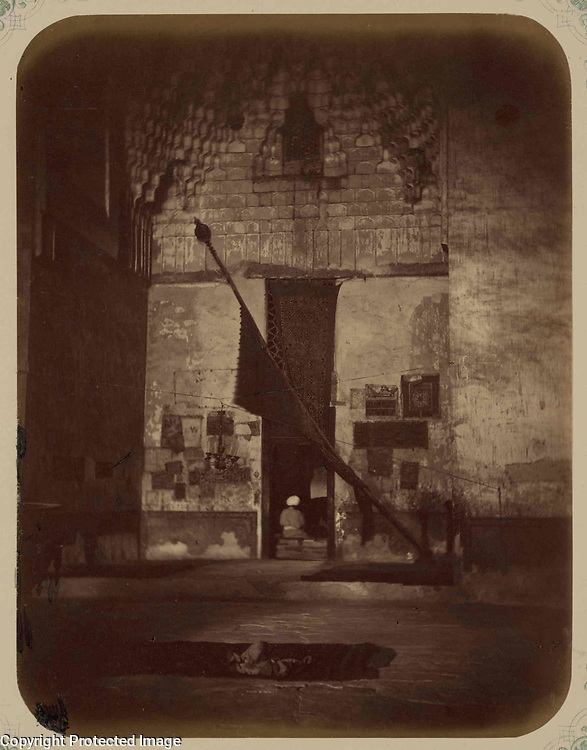