Antiquities of Samarkand. Tomb of Saint Kusam-ibn-Abbas (Shah-i Zindah) and Adjacent Mausoleums. Plan of the General Arrangement of Sections and Elevations

1868
This plan of the Shah-i Zindah necropolis in Samarkand is from the archeological part of Turkestan Album. This lavish edition in six volumes was produced in 1871-72 under the patronage of General Konstantin P. von Kaufman, the first governor-general, in 1867-82, of Turkestan, as the Russian Empire's Central Asian territories were called. The primary compilers for the visual material were Aleksandr L. Kun, an Orientalist attached to the army, and Nikolai V. Bogaevskii, a military engineer. They devoted special attention to Samarkand’s Islamic architecture, including 14th- and 15th-century monuments from the reign of Tamerlane and his successors (the Timurids). Among the accomplishments of this period is a collection of mausoleums known as Shah-i Zindah (Persian for “living king”). Built on an ancient burial ground, the necropolis is revered as a memorial to Kusam-ibn-Abbas, a cousin of the Prophet Muhammad. This site plan covers the entire ensemble: the entrance portal (left); the steps and first group of mausoleums; and the upper passageway culminating in mausoleums and shrines. Also shown are elevations and sections of the entrance portal and steps to the first ensemble. The detailed documentation of these monuments in Turkestan Album reflects a concern for their preservation. 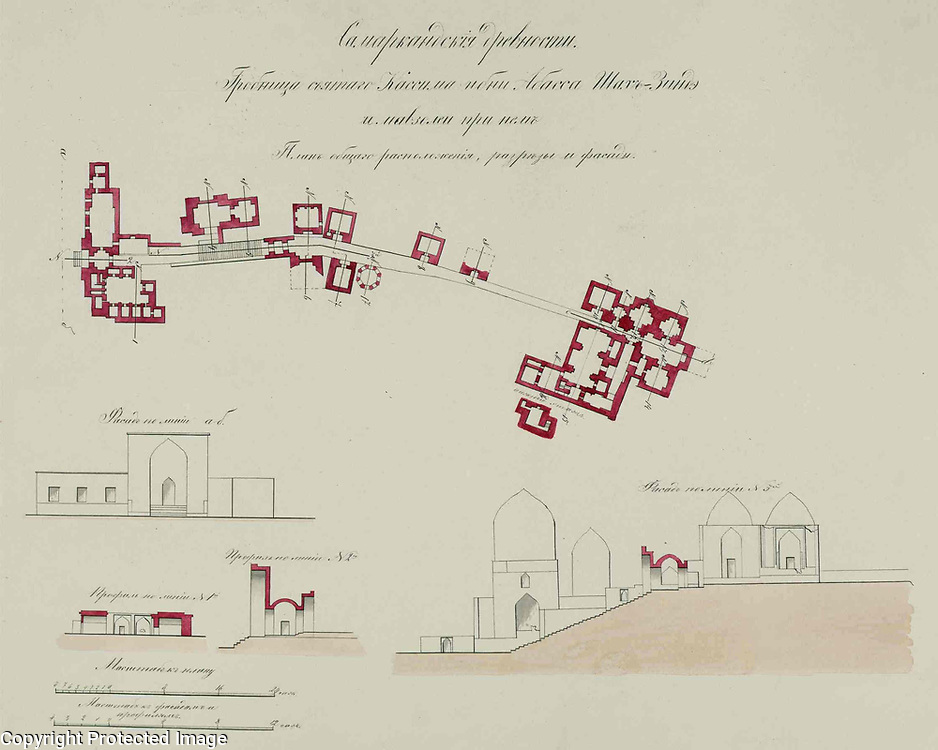