Portion of Entrance Door on Right Side of Tillia-Kari. Samarkand

1905
In the center of Samarkand is the Registan complex, composed of three major examples of the madrasah (religious school). The third Registan component, the Tilla Kari Madrasah, was built in 1646–60 on the site of a former caravansarai. Shown here is the right half of an imposing entrance (on the building’s right side, according to caption), set within a peshtak (entrance arch). The door contains an inscription panel with cursive Perso-Arabic script and two panels of intricate wooden relief carving. The entrance is framed by tiles in a basic geometric pattern. The lower part of the arch flank (on right) is surfaced in stone (probably marble), culminating in an inscription band. The image is by Russian photographer Sergei Mikhailovich Prokudin-Gorskii (1863–1944), who used a special color photography process to create a visual record of the Russian Empire in the early 20th century. Some of Prokudin-Gorskii’s photographs date from about 1905, but the bulk of his work is from between 1909 and 1915, when, with the support of Tsar Nicholas II and the Ministry of Transportation, he undertook extended trips through many parts of the empire. Prokudin-Gorskii was particularly interested in the ancient city of Samarkand (in present-day Uzbekistan), which he visited on a number of occasions, including two trips in 1911. 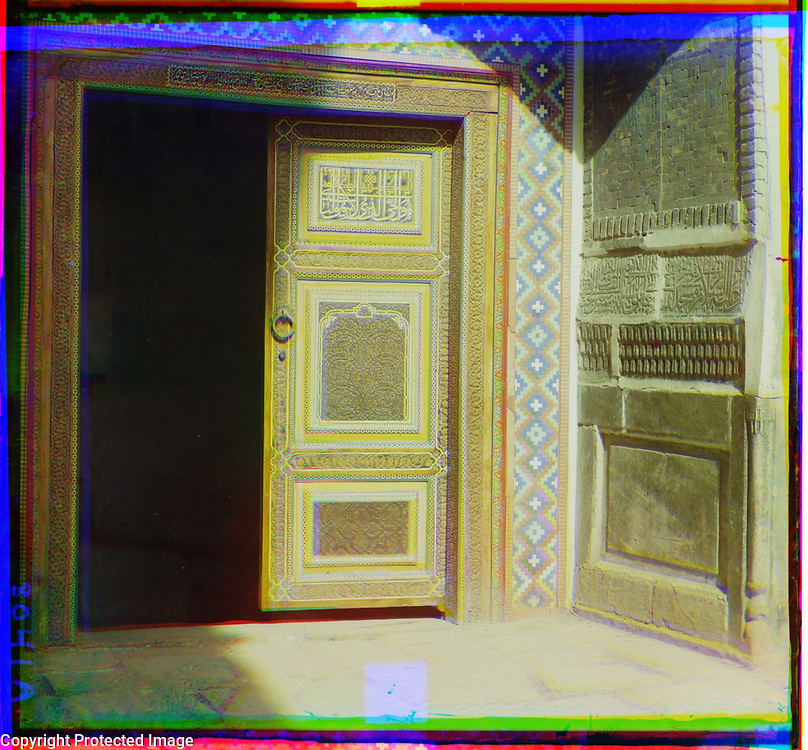