Adobe Buildings, One with Dome

1905
Shown here is the mazar (mausoleum) of Akhmed Zamcha, located among the ruins of the fabled city of Merv on the Murghab River in the Mary region of present-day Turkmenistan. Settled in the third millennium BC, Merv was taken by the Arabs in 651 and became a staging point for Arab conquests in Central Asia. Merv reached its zenith under the Seljuks in the late 11th and 12th centuries, when it was one of the world’s largest cities and a major stop along the Silk Road. Destroyed by the Mongols in 1221, Merv never regained its former importance. This modest domed adobe shrine, with two buildings and a low wall, was still an object of veneration when the photograph was taken. The poles visible above the dome serve as burial markers. The image is by Russian photographer Sergei Mikhailovich Prokudin-Gorskii (1863–1944), who used a special color photography process to create a visual record of the Russian Empire in the early 20th century. Some of Prokudin-Gorskii’s photographs date from about 1905, but the bulk of his work is from between 1909 and 1915, when, with the support of Tsar Nicholas II and the Ministry of Transportation, he undertook extended trips through many parts of the empire. Prokudin-Gorskii was particularly interested in recently acquired territories of the Russian Empire such as Turkestan in Central Asia (present-day Uzbekistan and neighboring states), which he visited on a number of occasions, including two trips in 1911. Among his goals was to photograph the region’s architectural and archeological monuments. 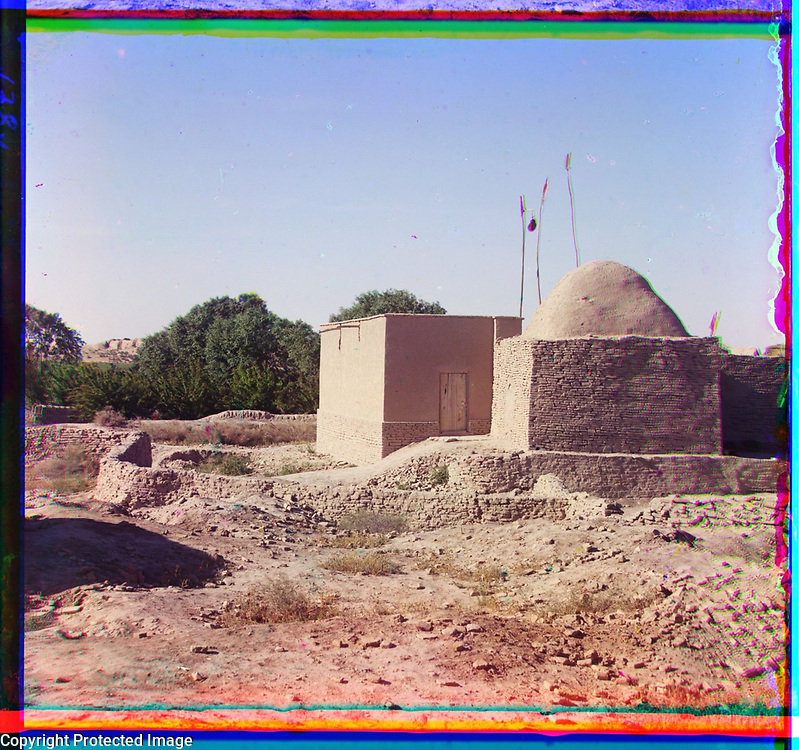