1907
Shown in this winter view is a local policeman dressed in a Russian-style winter uniform with a karakul hat adorned with a badge. The long coat has shoulder boards indicating a rank equivalent to sergeant. He is armed with a sabre (right) and a pistol on a red lanyard. He is standing guard at the gated entrance to the territory of the Namazga Mosque in Samarkand. The entrance, probably erected in the late 19th century, is built of fired Russian brick, rather than the usual soft adobe. The attached column is decorated in a simple tile pattern. The image is by Russian photographer Sergei Mikhailovich Prokudin-Gorskii (1863–1944), who used a special color photography process to create a visual record of the Russian Empire in the early 20th century. Some of Prokudin-Gorskii’s photographs date from about 1905, but the bulk of his work is from between 1909 and 1915, when, with the support of Tsar Nicholas II and the Ministry of Transportation, he undertook extended trips through many different parts of the empire. Prokudin-Gorskii was particularly interested in recently acquired territories of the Russian Empire such as Turkestan (present-day Uzbekistan and neighboring states), which he visited on a number of occasions, including a trip in January 1907 that focused on the ancient cities of Bukhara and Samarkand. Turkestan appealed to him not only for its Islamic architecture but also for scenes from traditional life in cities such as Samarkand. 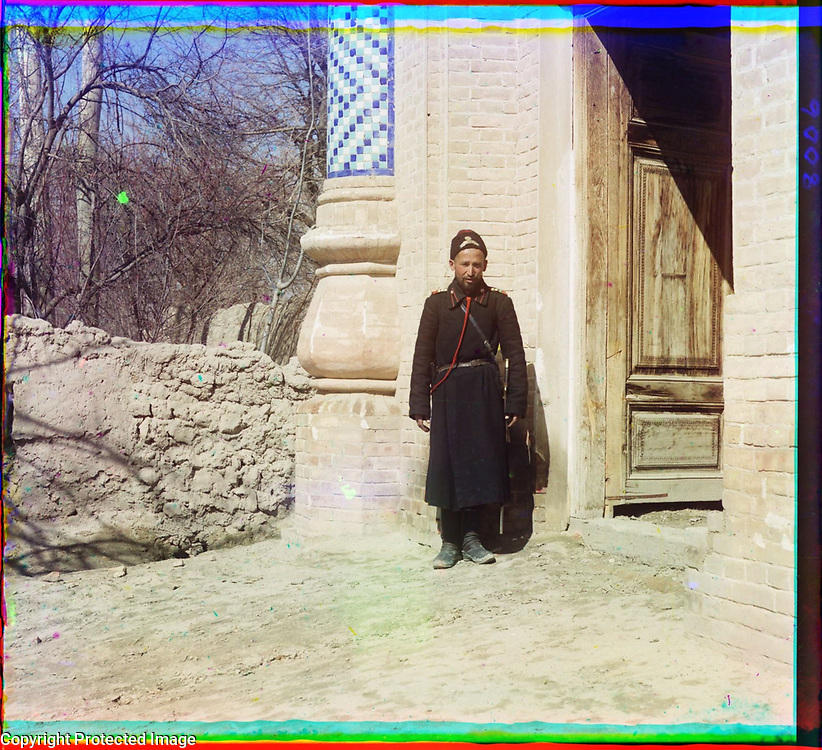