Antiquities of Samarkand. Madrasah of Bibi Khanym. Congregational Mosque (Friday Mosque). Inscription on the Left Side of the Marble Reading-Stand (Lau)

1868
This photograph of a part of the marble Qurʼan holder at the main mosque of the Bibi Khanym ensemble in Samarkand (Uzbekistan) is from the archeological part of Turkestan Album. The six-volume photographic survey was produced in 1871-72 under the patronage of General Konstantin P. von Kaufman, the first governor-general (1867-82) of Turkestan, as the Russian Empire’s Central Asian territories were called. The album devotes special attention to Samarkand’s Islamic architecture, such as 14th- and 15th-century monuments from the reign of Timur (Tamerlane) and his successors. Built in 1399-1405 with the spoils of Timur’s campaign in India, the Bibi Khanym ensemble was the location of the city’s main, or Friday, mosque, named in homage to Timur’s senior wife, Sarai Mulk Khanym. The ensemble centers on the mosque, one of the largest in the Islamic world. Inside the mosque was an enormous Qurʼan holder (rihal) donated by Timur’s grandson Ulugh Beg and consisting of two massive triangular marble blocks resting on a marble plinth. Shown here is the left half of the rectangular side of the right block, with carved decoration consisting of scrolls and a pointed foliate pattern of remarkable complexity. The surface is framed by a band of cursive script. In 1875, a few years after this photograph was taken, the lectern was moved into the courtyard in front of the mosque. 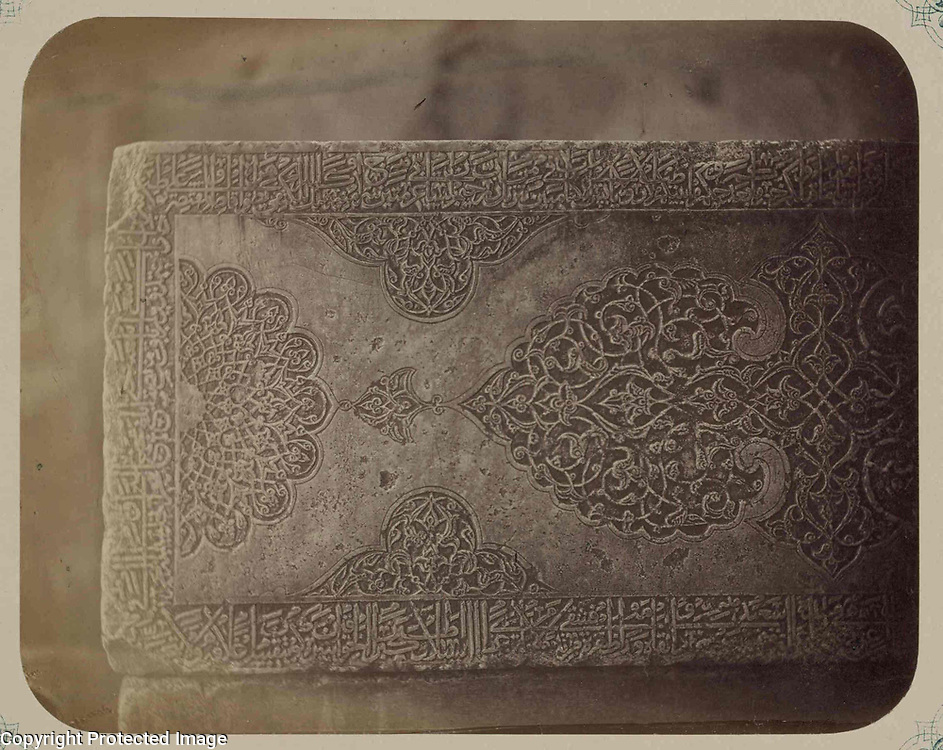