Zindan (Prison), with Inmates Looking Out through the Bars and a Guard with Russian Rifle, Uniform, and Boots, Central Asia

1907
In this arresting photograph a guard stands at attention next to a primitively barred portal at the zindan (prison) in Bukhara. A visitor squats next to the portal, while prisoners huddle behind the bars. The men wear quilted robes to protect against the intense cold of the unheated brick jail. Snow and ice are banked against the whitewashed walls. The guard is dressed in Russian-style uniform, with a sheepskin hat, a padded tunic, red breeches, and high leather boots. He holds a flintlock rifle with fixed bayonet. The image is by Russian photographer Sergei Mikhailovich Prokudin-Gorskii (1863–1944), who used a special color photography process to create a visual record of the Russian Empire in the early 20th century. Some of Prokudin-Gorskii’s photographs date from about 1905, but the bulk of his work is from between 1909 and 1915, when, with the support of Tsar Nicholas II and the Ministry of Transportation, he undertook extended trips through many different parts of the empire. Prokudin-Gorskii was particularly interested in recently acquired territories of the Russian Empire such as Turkestan (present-day Uzbekistan and neighboring states), which he visited on a number of occasions, including a trip in January 1907 that focused on the ancient cities of Bukhara and Samarkand. In contrast to extensive Russian influence in Samarkand, Bukhara’s traditional culture and appearance remained relatively intact. 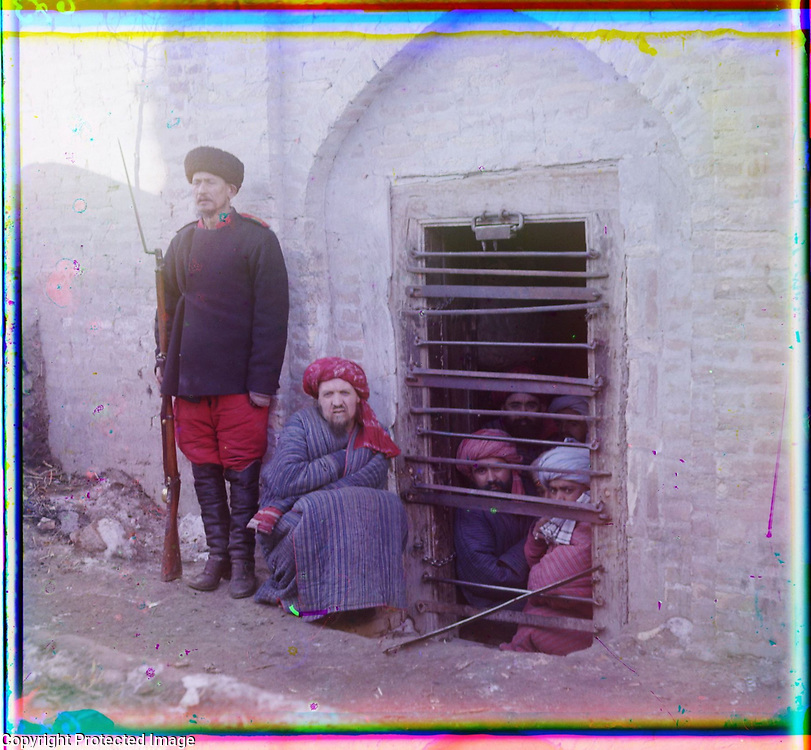