Kush-Beggi (Minister of the Interior). Bukhara

1905
Between 1785 and 1920, eight emirs of the Manghit dynasty ruled Buhkara (in present-day Uzbekistan). After the Russian occupation of Samarkand (1868), the Emirate of Bukhara became a Russian protectorate. Seen here is Djanmirza-kushbegi, the emir’s kushbegi (plenipotentiary) from 1910–20. In this position the kushbegi implemented the emir’s will in all areas of government, including in the interior ministry, as noted in the caption. The kushbegi wears a splendid silk robe decorated with Russian orders and a red sash. In his lap he holds a ceremonial saber with gilded scabbard. The image is by Russian photographer Sergei Mikhailovich Prokudin-Gorskii (1863–1944), who used a special color photography process to create a visual record of the Russian Empire in the early 20th century. Some of Prokudin-Gorskii’s photographs date from about 1905, but the bulk of his work is from between 1909 and 1915, when, with the support of Tsar Nicholas II and the Ministry of Transportation, he undertook extended trips through many different parts of the empire. Prokudin-Gorskii was interested in recently acquired territories of the Russian Empire such as Turkestan, which he visited on a number of occasions, including trips in 1907 and 1911 to the ancient city of Bukhara. Prokudin-Gorskii was granted permission to photograph the rulers of the Buhkara, including the emir himself. 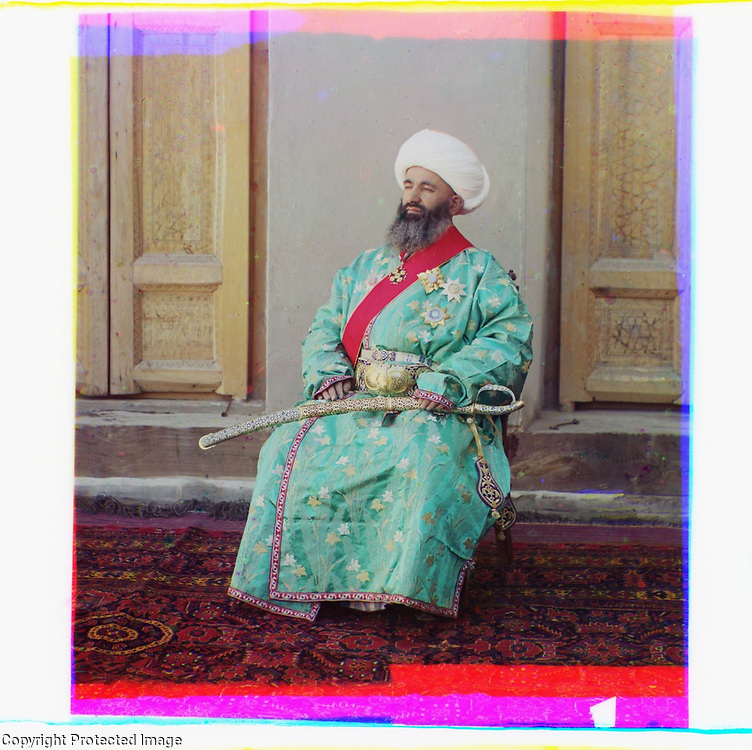