1905
The Shah-i Zindah Necropolis, located at the outskirts of Samarkand (present-day Uzbekistan), was built on an ancient burial ground. Shah-i Zindah (Persian for “living king”) is revered as a memorial to Kusam-ibn-Abbas, a cousin of the Prophet Mohammad. Most of the some two-dozen mausolea and shrines date from the late 14th and 15th centuries. This photograph shows a structure with two domes, thought to have been built in 1437 by the astronomer king Ulugh Beg, grandson of Timur (Tamerlane). Identified in some sources as the mausoleums of Timur's benefactress and her daughter (Uldzk Inak and Bibi Zinet), the structure is also considered the tomb of Ulugh Beg’s fellow astronomer, Kazy-Zade Rumi. This view shows extensive damage to the remarkable ceramic decoration (including patterned Arabic script), which has since been restored. The image is by Russian photographer Sergei Mikhailovich Prokudin-Gorskii (1863–1944), who used a special color photography process to create a visual record of the Russian Empire in the early 20th century. Some of Prokudin-Gorskii’s photographs date from about 1905, but the bulk of his work is from between 1909 and 1915, when, with the support of Tsar Nicholas II and the Ministry of Transportation, he undertook extended trips through many different parts of the empire. In 1911 his travels took him to Turkestan, where he devoted special attention to monuments of Islamic architecture. 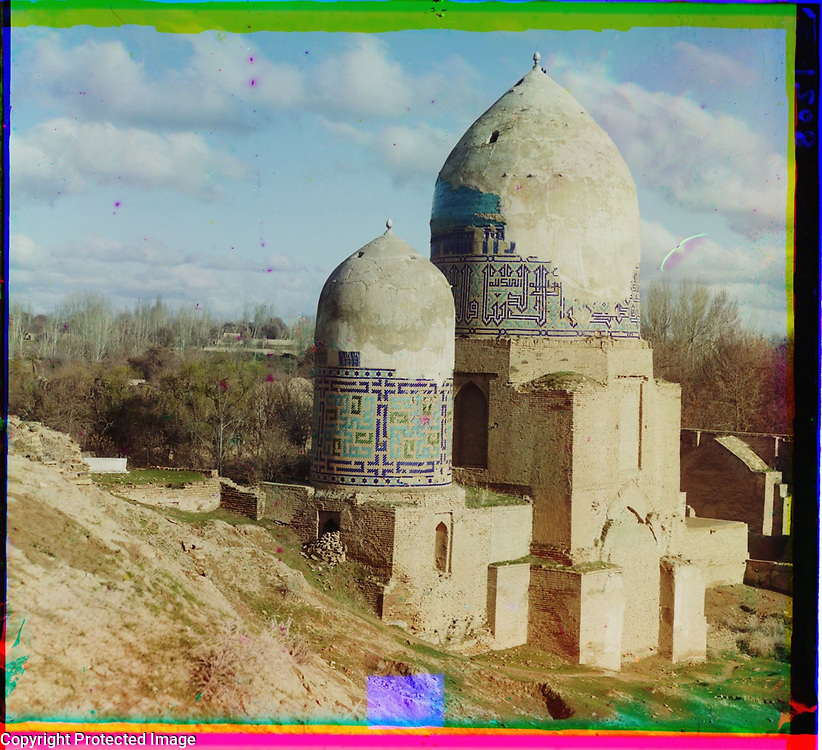