1905
This photograph shows apricot trees at the Shir-Budun Park of the Emir near Bukhara (present-day Uzbekistan). The trees have begun to flower. Although often associated with ancient Armenia, the origins of apricot cultivation remain unclear. Apricots were known in Persia several centuries BCE, and their presence may be as old in Central Asia. To this day Uzbekistan is one of the world’s largest producers of apricots, as the region’s cold winters and dry climate are conducive to proper maturation of the fruit. The flowers have five petals and appear in early spring. Amid the dense growth in this view is a primitive pergola composed of log posts. On the left there appears to be a figure with a brightly patterned robe. Also located in the park was the palace of the emir. The image is by Russian photographer Sergei Mikhailovich Prokudin-Gorskii (1863–1944), who used a special color photography process to create a visual record of the Russian Empire in the early 20th century. Some of Prokudin-Gorskii’s photographs date from about 1905, but the bulk of his work is from between 1909 and 1915, when, with the support of Tsar Nicholas II and the Ministry of Transportation, he undertook extended trips through many different parts of the empire. In 1911 he made two trips to an area of Central Asia then known as Turkestan, where he photographed not only architectural monuments but also everyday scenes. 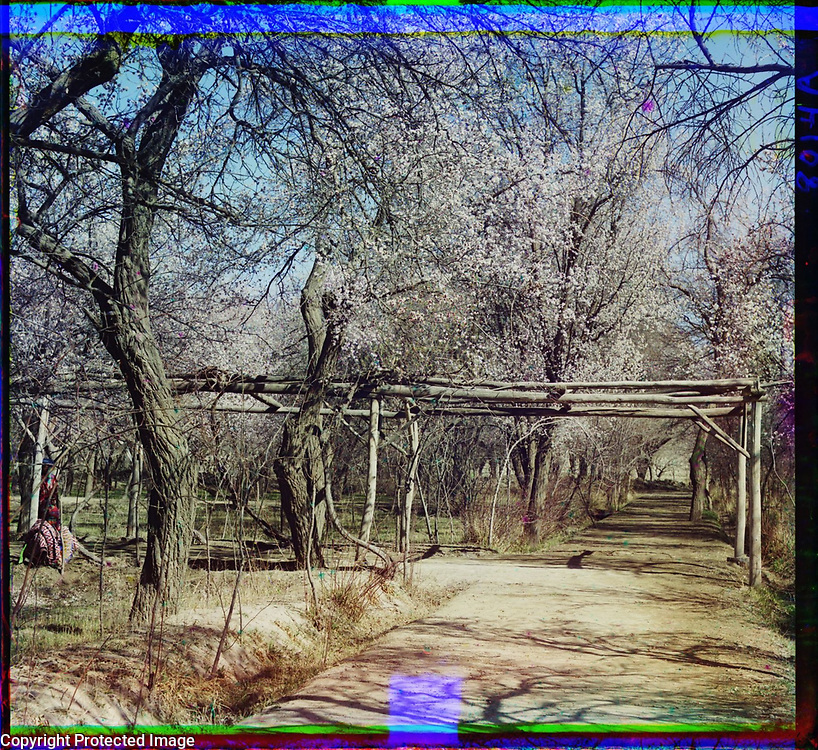