Detail inside the Baian-Kuli-Khan Tomb. Bukhara

1905
This photograph shows a corner vault beneath the dome of the 16th-century mausoleum of the Chagatai Khan Bayan Qulï in the Faisakhan area on the outskirts of Bukhara. In 1348 Bayan Qulï was made titular ruler of Bukhara by Emir Qazaghan, who had seized power in the area in 1346. In 1358 the emir was assassinated. Power passed to his son Abdullah, who then had the Bayan Qulï executed. Abdullah was himself killed the same year, and Bayan Qulï was buried next to the mausoleum of his revered teacher, Sheikh Saif ed-Din Bokharzi. The mausoleum of Bayan Qulï shows the elaborate decorative style of 16th-century Bukhara, including ample use of carved terra cotta with a blue glaze. The image is by Russian photographer Sergei Mikhailovich Prokudin-Gorskii (1863–1944), who used a special color photography process to create a visual record of the Russian Empire in the early 20th century. Some of Prokudin-Gorskii’s photographs date from about 1905, but the bulk of his work is from between 1909 and 1915, when, with the support of Tsar Nicholas II and the Ministry of Transportation, he undertook extended trips through many parts of the empire. In 1911 he traveled to a region of Central Asia then known as Turkestan (present-day Uzbekistan and neighboring states), where he photographed monuments of Islamic architecture in Bukhara. 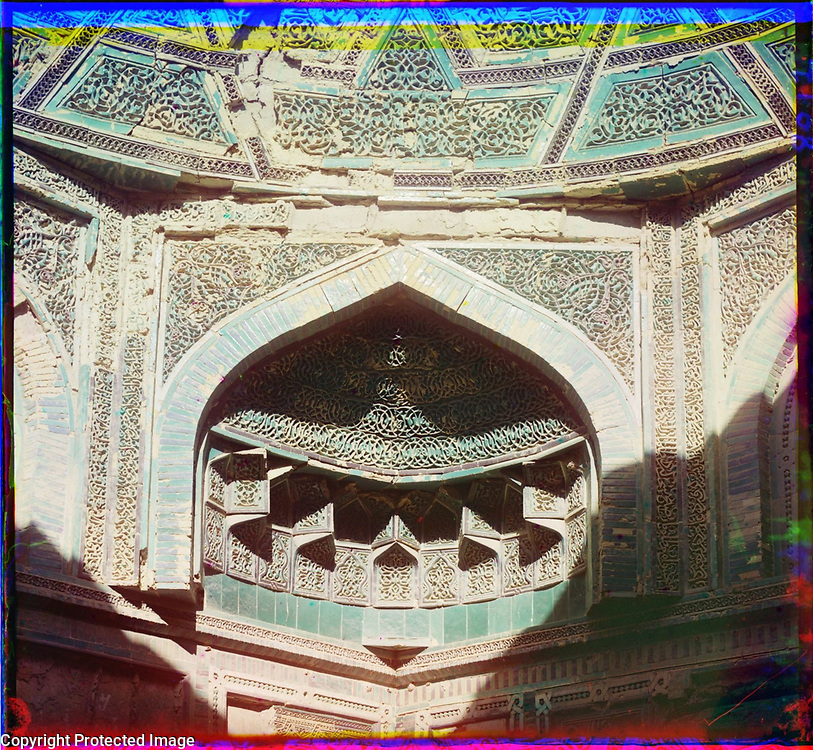