1865
This photograph of the middle group of shrines at the Shah-i Zindah necropolis in Samarkand is from the archeological part of Turkestan Album. The six-volume photographic survey was produced in 1871-72, under the patronage of General Konstantin P. von Kaufman, the first governor-general (1867-82) of Turkestan, as the Russian Empire's Central Asian territories were called. The album devotes special attention to Samarkand’s Islamic architecture, such as 14th- and 15th-century monuments from the reign of Timur (Tamerlane) and his successors. Of particular note is the Shah-i Zindah (Persian for “living king”) ensemble, built on the elevated site of an ancient settlement known as Afrosiab and revered as a memorial to Kusam-ibn-Abbas, a cousin of the Prophet Muhammad. This impressive view was taken from high ground to the east of the ensemble. It shows the brick back walls of the Shirin Bika Aka Mausoleum, capped by a high drum and dome with ceramic decoration, as well as a small octagonal mausoleum (center). Also included are the ribbed domes of the Emir-Zade Mausoleum (center background) and of the Shadi Mulk Mausoleum. The upper corner of the Shadi Mulk main facade is visible, together with its east wall (on right). Dating from the late 14th and early 15th centuries, these shrines are among the jewels of Timurid architecture. In the foreground are brick burial mounds. 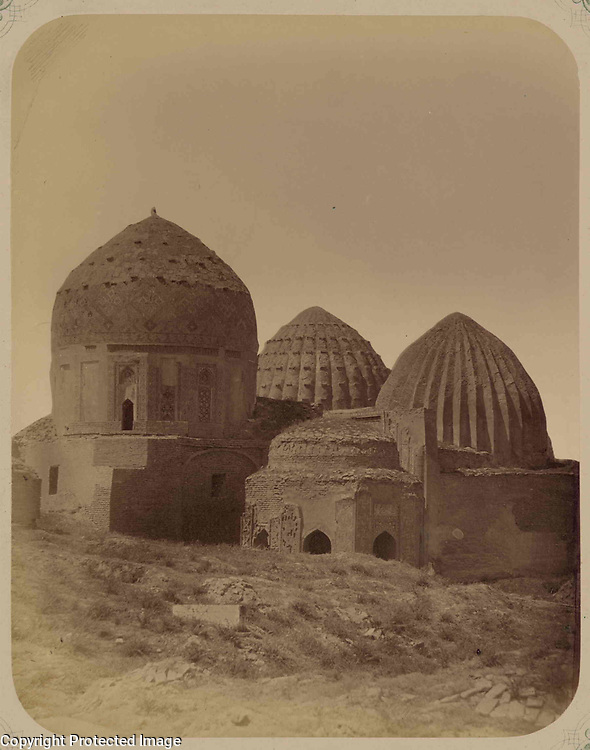