Bibi-Khanym. Detail of Northeast Side. Samarkand

1905
This view shows part of the rich ceramic work on the northeast side of the main facade of the great mosque at the Bibi Khanym complex in Samarkand. Built in 1399–1405 by the conqueror Timur (Tamerlane) with the spoils of his campaign in India, the Bibi Khanym complex was the location of the city’s primary mosque, named in honor of Timur’s senior wife, Sarai Mulk Khanym. The complex centers on the Main, or Friday, Mosque, one of the largest in the Islamic world. Shown here is an array of ceramic ornamentation, including intricate geometric figures integrated with block Kufic script, as well as vertical decorative strips with geometric and floral patterns. On the left is part of an attached tower with panels containing elaborate star patterns. Above are panels with cursive Perso-Arabic inscriptions. The image is by Russian photographer Sergei Mikhailovich Prokudin-Gorskii (1863–1944), who used a special color photography process to create a visual record of the Russian Empire in the early 20th century. Some of Prokudin-Gorskii’s photographs date from about 1905, but the bulk of his work is from between 1909 and 1915, when, with the support of Tsar Nicholas II and the Ministry of Transportation, he undertook extended trips through many parts of the empire. In 1911 he traveled to the region of Central Asia then known as Turkestan (present-day Uzbekistan and neighboring states). 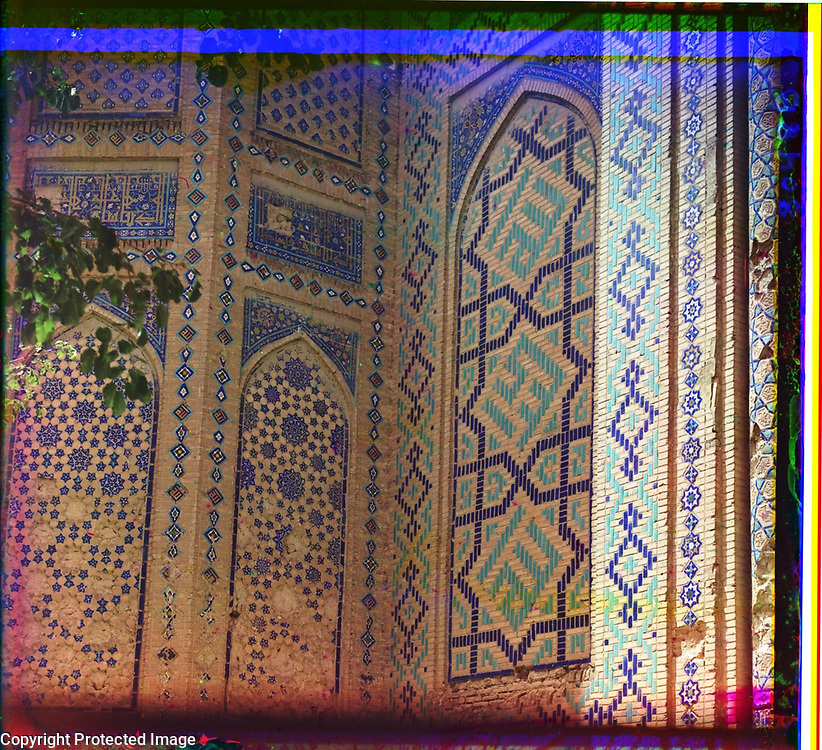