1911
Between 1785 and 1920 Bukhara was ruled by eight emirs in the Manghit dynasty. After the Russian conquest of Samarkand (1868), the Emirate of Bukhara became a Russian protectorate. Seen here is the last emir of Bukhara, Said Mir Mohammed Alim Khan (1880–1944). Following the death of his father, Abdulahad Khan, in late 1910, Alim Khan assumed power in Bukhara. He initially flirted with ideas of reform, but self-interest and the opposition of conservative clergy led him back to despotic rule. Overthrown by the Red Army in September 1920, he went into exile and eventually settled in Kabul, Afghanistan. The image is by Russian photographer Sergei Mikhailovich Prokudin-Gorskii (1863–1944), who used a special color photography process to create a visual record of the Russian Empire in the early 20th century. Some of Prokudin-Gorskii’s photographs date from about 1905, but the bulk of his work is from between 1909 and 1915, when, with the support of Tsar Nicholas II and the Ministry of Transportation, he undertook extended trips through many different parts of the empire. Prokudin-Gorskii was particularly interested in recently acquired territories of the Russian Empire such as Turkestan (present-day Uzbekistan and neighboring states), which he visited on a number of occasions, including trips in January 1907 and 1911 to the ancient cities of Bukhara and Samarkand. Prokudin-Gorskii made this and a number of other portraits of Said Mir Mohammed Alim Khan in 1911. 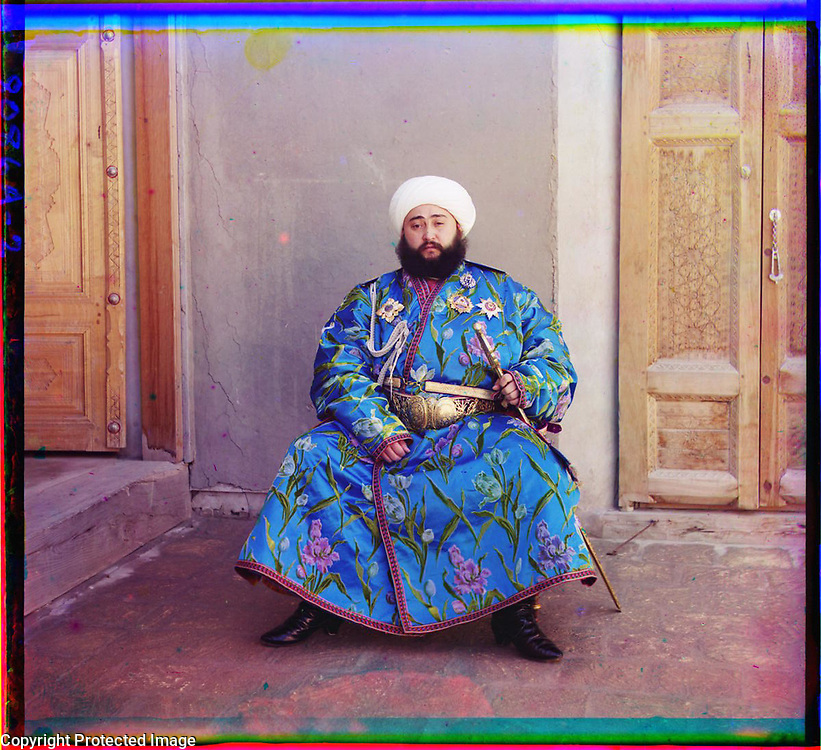