Above Main Entrance to Bibi-Khanym. Samarkand

1905
The enormous Bibi Khanym complex in Samarkand was built in 1399–1405 with the spoils of Timur’s (Tamerlane’s) campaign in India. Bibi Khanym was named in homage to Timur’s senior wife, Sarai Mulk Khanym. The rectangular courtyard of the complex centers on the Main, or Friday, Mosque. This view of the central entrance, set within the iwan (entrance arch) of the mosque, shows the effects of extensive damage, particularly after an 1897 earthquake, but much of the ceramic ornamentation remains, including cursive Perso-Arabic inscription bands and panels, as well as star and floral motifs. The arched panel (right) displays geometric figures integrated with words in block Kufic script from the Kalima, or Islamic declaration of faith. Beyond the arch is the front wall of the mosque. The image is by Russian photographer Sergei Mikhailovich Prokudin-Gorskii (1863–1944), who used a special color photography process to create a visual record of the Russian Empire in the early 20th century. Some of Prokudin-Gorskii’s photographs date from about 1905, but the bulk of his work is from between 1909 and 1915, when, with the support of Tsar Nicholas II and the Ministry of Transportation, he undertook extended trips through many different parts of the empire. In 1911 his travels took him to Samarkand (present-day Uzbekistan), where he photographed monuments of Islamic architecture. 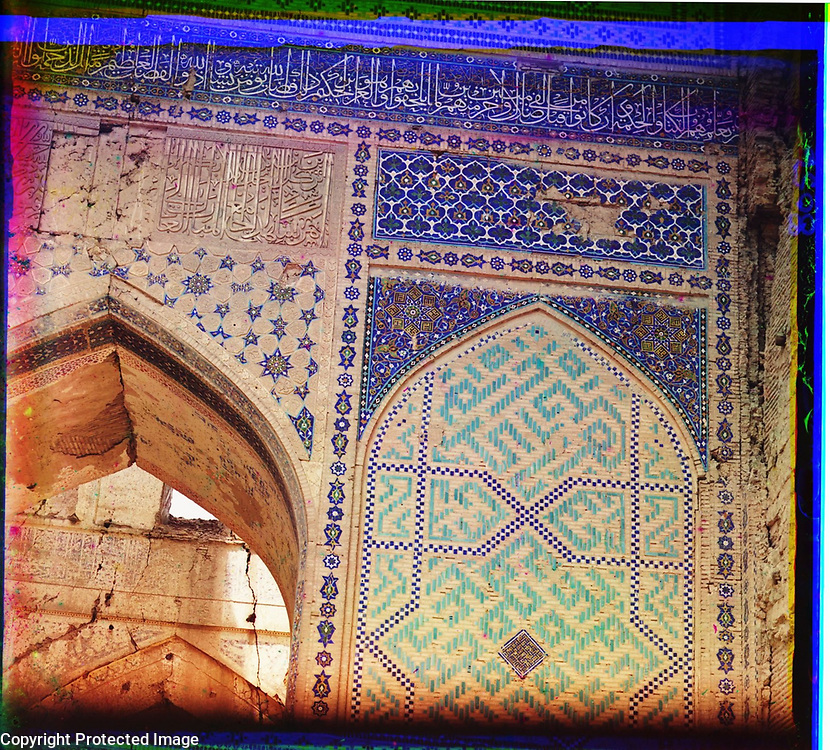