1905
After the Russian conquest of Samarkand in 1868, the Emirate of Bukhara remained nominally independent but in fact became a Russian protectorate linked to Russian settlements by the Trans-Caspian Railway. In contrast to Samarkand, where Western influence was much in evidence, in Bukhara the traditional culture and appearance remained relatively intact. Seen here is an official in the administration of the emir. His high rank is indicated by the luxurious robe. In the background is the facade of the palace of Emir Shir-Budun, located in a park on the outskirts of Bukhara. The image is by Russian photographer Sergei Mikhailovich Prokudin-Gorskii (1863–1944), who used a special color photography process to create a visual record of the Russian Empire in the early 20th century. Some of Prokudin-Gorskii’s photographs date from about 1905, but the bulk of his work is from between 1909 and 1915, when, with the support of Tsar Nicholas II and the Ministry of Transportation, he undertook extended trips through many parts of the empire. Prokudin-Gorskii was particularly interested in recently acquired territories of the Russian Empire such as Turkestan (present-day Uzbekistan and neighboring states), which he visited on a number of occasions, including two trips in 1911. Turkestan appealed to him not only for its Islamic architecture but also for the transformation brought by Russian settlement. 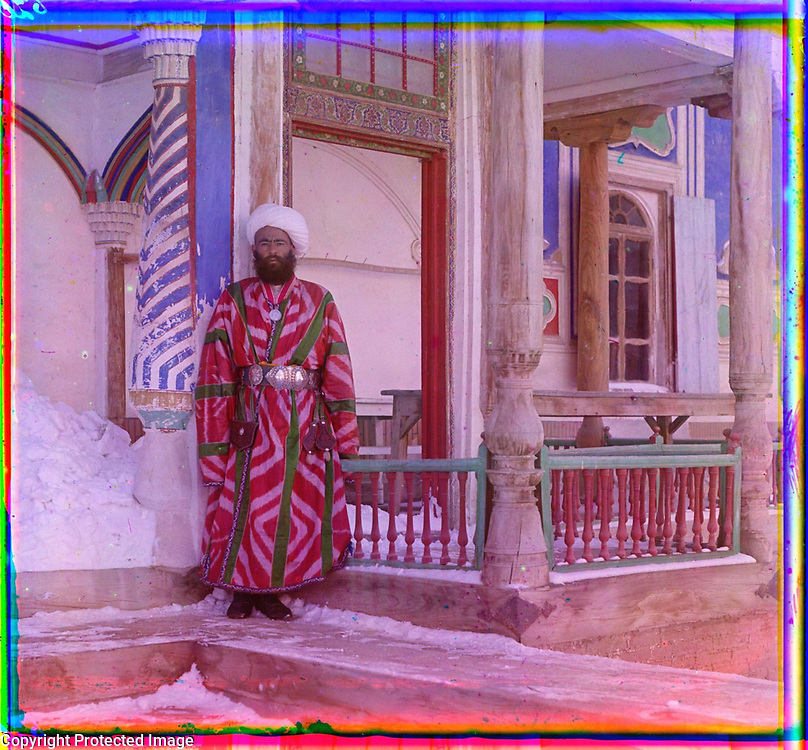