1868
This photograph of the door of the main entrance to the Tillia Kari Madrasah in Samarkand (Uzbekistan) is from the archeological part of Turkestan Album. The six-volume photographic survey was produced in 1871-72 under the patronage of General Konstantin P. von Kaufman, the first governor-general (1867-82) of Turkestan, as the Russian Empire’s Central Asian territories were called. The album devotes special attention to Samarkand’s Islamic architecture, such as 14th- and 15th-century monuments from the reign of Timur (Tamerlane) and his successors. In the center of Samarkand is the Registan ensemble, composed of three major examples of a madrasah (religious school). The third Registan component, the Tillia Kari Madrasah, was built in 1646-60, on the site of a former caravanserai. The entrance to the rectangular courtyard is framed by a great iwan (vaulted hall, walled on three sides, with one end open) flanked on either side by a two-story arcade. Shown here is the wooden door within the iwan niche. The panels of the door are covered with a relief of intricate carving in geometric and botanical motifs. The top horizontal panels contain carved inscription bands in a cursive style. Both sides of the door show vertical cracks and have been reinforced by metal strips at the top and bottom. 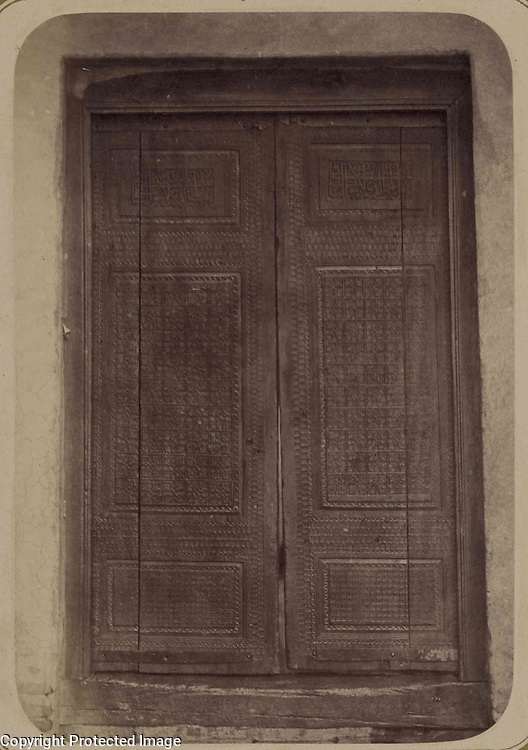