Detail of Ulugh Beg (to the Right of the Entrance). Samarkand

1905
At the center of Samarkand is the Registan complex, composed of three major madrasahs (religious schools). The oldest madrasah on Registan Square is named after the astronomer king Ulugh Beg (1393?–1449; grandson of Timur), who built it in 1417–20. During his reign some 100 students attended this center of Islamic education. Seen here is the upper part of the interior courtyard facade to the left of the main entrance arch. The courtyard was enclosed with two levels of recessed, arched bays that contained rooms for scholars. This view shows fragments of polychrome decorative ceramics, which include faience tiles with intricate botanical figures as well as intricate cursive inscription bands. The image is by Russian photographer Sergei Mikhailovich Prokudin-Gorskii (1863–1944), who used a special color photography process to create a visual record of the Russian Empire in the early 20th century. Some of Prokudin-Gorskii’s photographs date from about 1905, but the bulk of his work is from between 1909 and 1915, when, with the support of Tsar Nicholas II and the Ministry of Transportation, he undertook extended trips through many parts of the empire. In 1911 he traveled to a region of Central Asia then known as Turkestan (present-day Uzbekistan and neighboring states), where he photographed many of the monuments of Samarkand’s Islamic architecture. 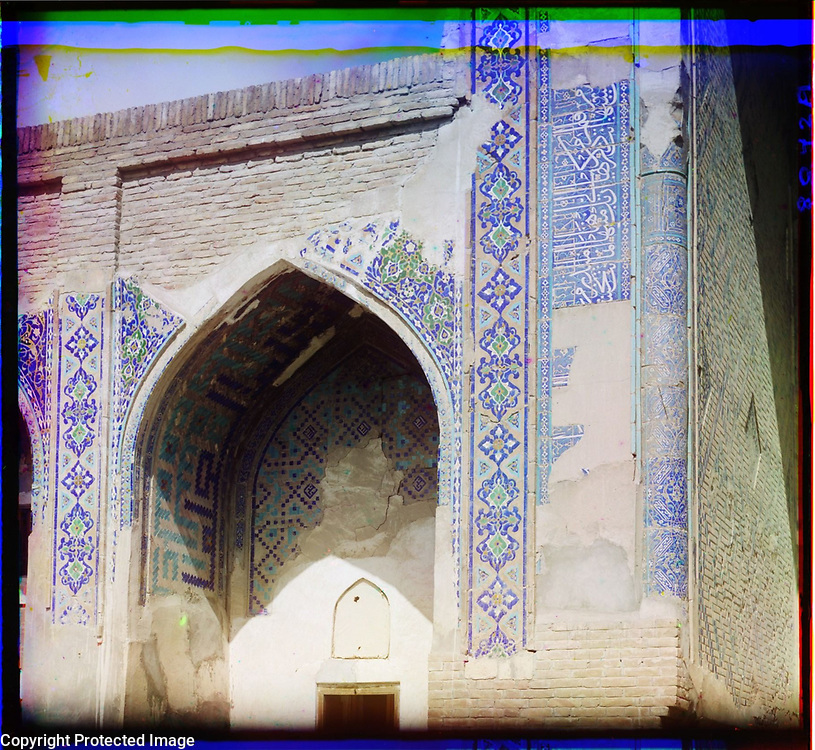