Detail of Left Side of Duan-Beggi Madrasah. Bukhara

1905
The Astrakhanid dynasty in Bukhara during the 17th century was adept at organizing urban space. The Liabi-Khauz complex is a fine example. It was a trading area with a square reservoir that provided water and served as a reflecting pool for three adjacent religious buildings. Among them is the madrasah (religious school) built in 1622–23 by Nadir Divan-begi, a vizier (high official) and uncle of the Bukhara ruler Iman Kuli-Khan. This photograph shows part of the facade, with recessed, arched bays that contained rooms for scholars. The adobe walls were originally covered with polychrome ceramic tiles, most of which were lost. The facade has been re-covered with a patchwork of tiles from other sources. The image is by Russian photographer Sergei Mikhailovich Prokudin-Gorskii (1863–1944), who used a special color photography process to create a visual record of the Russian Empire in the early 20th century. Some of Prokudin-Gorskii’s photographs date from about 1905, but the bulk of his work is from between 1909 and 1915, when, with the support of Tsar Nicholas II and the Ministry of Transportation, he undertook extended trips through many parts of the empire. In 1911 he traveled to a region of Central Asia then known as Turkestan (present-day Uzbekistan and neighboring states), where he photographed many of the ancient monuments of Bukhara. 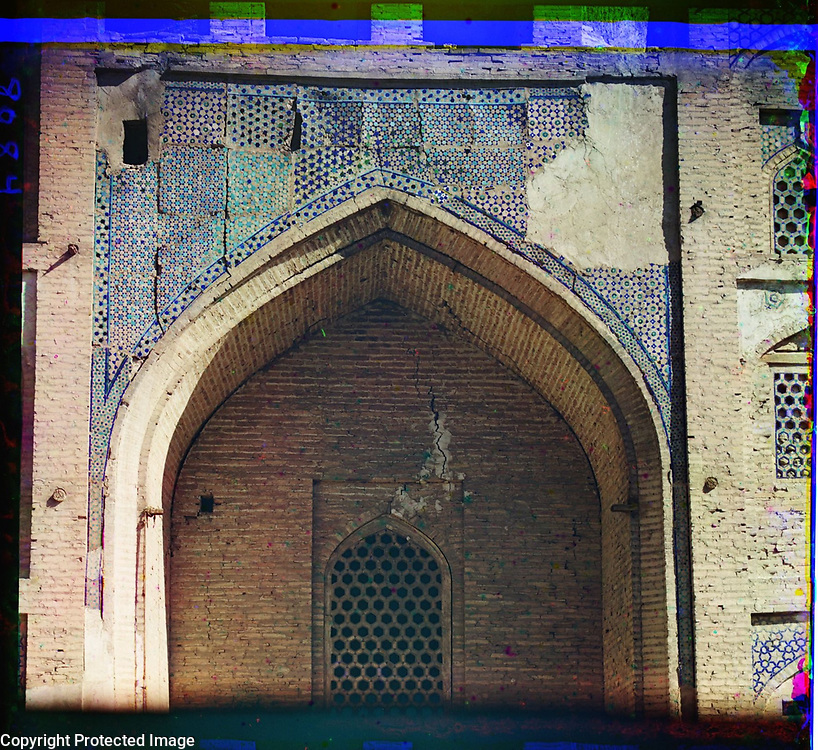