1878
This photograph of the ambassadors appointed by Ghazi Mohammad Ayūb Khān (1857–1914) is from an album of rare historical photographs depicting people and places associated with the Second Anglo-Afghan War. Ayūb Khān was the son of the deposed Afghan amir, Sher ʻAlī Khān (1825–79), and cousin of the future amir, Abd al-Raḥmān Khān (1844–1901). He won a significant Afghan victory at the Battle of Maiwand in July 1880, only to be decisively defeated by Sir Frederick Roberts (1832–1914) at the Battle of Kandahar two months later. He retreated to Herat in western Afghanistan and from there fought his cousin, militarily and diplomatically, for control of the country. Ayūb controlled Herat during and after the war. All the men in this picture wear long knee-length coats called chapans and some hold swords. The figures seated in the front are Umrjan Sahib Zadeh in the center, and Ayub’s vizier Abdullah Khan, seated on the left with his son on the right. The Second Anglo-Afghan War began in November 1878 when Great Britain, fearful of what it saw as growing Russian influence in Afghanistan, invaded the country from British India. The first phase of the war ended in May 1879 with the Treaty of Gandamak, which permitted the Afghans to maintain internal sovereignty but forced them to cede control over their foreign policy to the British. Fighting resumed in September 1879, after an anti-British uprising in Kabul, and finally concluded in September 1880 with the decisive Battle of Kandahar. The album includes portraits of British and Afghan leaders and military personnel, portraits of ordinary Afghan people, and depictions of British military camps and activities, structures, landscapes, and cities and towns. The sites shown are all located within the borders of present-day Afghanistan or Pakistan (a part of British India at the time). About a third of the photographs were taken by John Burke (circa 1843–1900), another third by Sir Benjamin Simpson (1831–1923)... 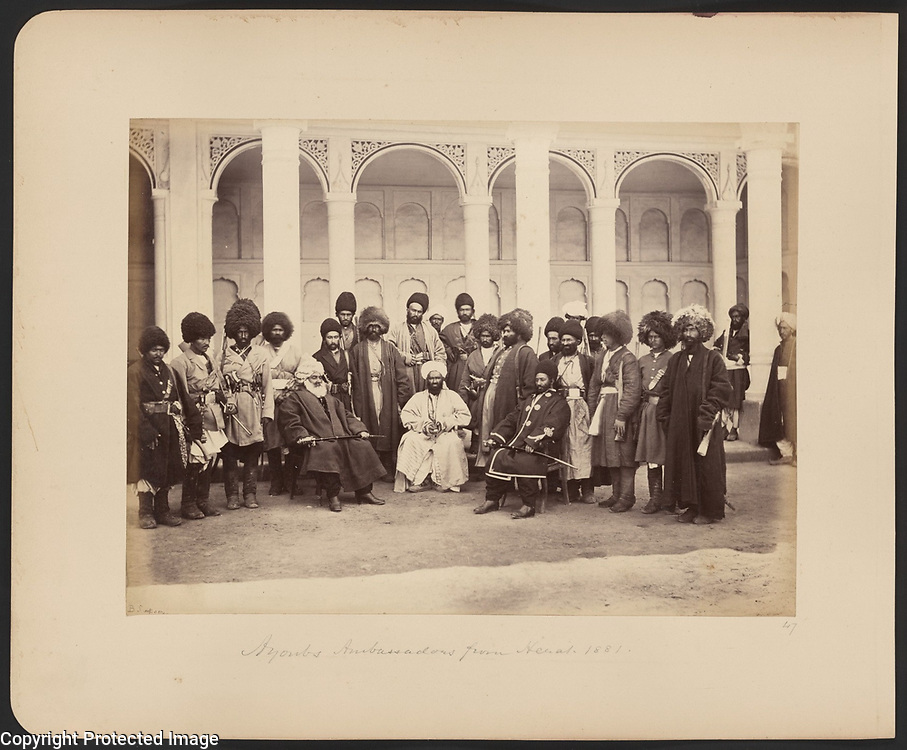