Dome of the Gur-Emir Mosque from Eastern Side. Samarkand

1905
Shown here is Gur-Emir ("tomb of the ruler") in Samarkand, the burial place of the great Timur (Tamerlane). Timur began building the shrine in 1403 in memory of his grandson Muhammad Sultan, who had founded a madrasah on this site in the late 14th century. Following Timur's own unexpected death from pneumonia in 1405, his body was also placed in the structure, which became the mausoleum of the Timurids. It was completed by another of Timur's grandsons, the astronomer-king Ulugh Beg. This view from the east side shows severe damage to the lavish ceramic ornamentation of the ribbed dome. The cylinder beneath the dome as well as the facades of the structure are adorned with sacred inscriptions. The image is by Russian photographer Sergei Mikhailovich Prokudin-Gorskii (1863–1944), who used a special color photography process to create a visual record of the Russian Empire in the early 20th century. Some of Prokudin-Gorskii’s photographs date from about 1905, but the bulk of his work is from between 1909 and 1915, when, with the support of Tsar Nicholas II and the Ministry of Transportation, he undertook extended trips through many different parts of the empire. Prokudin-Gorskii was particularly interested in recently acquired territories of the Russian Empire such as Turkestan (present-day Uzbekistan and neighboring states), which he visited on a number of occasions, including a trip in January 1907 that focused on the ancient city of Samarkand. 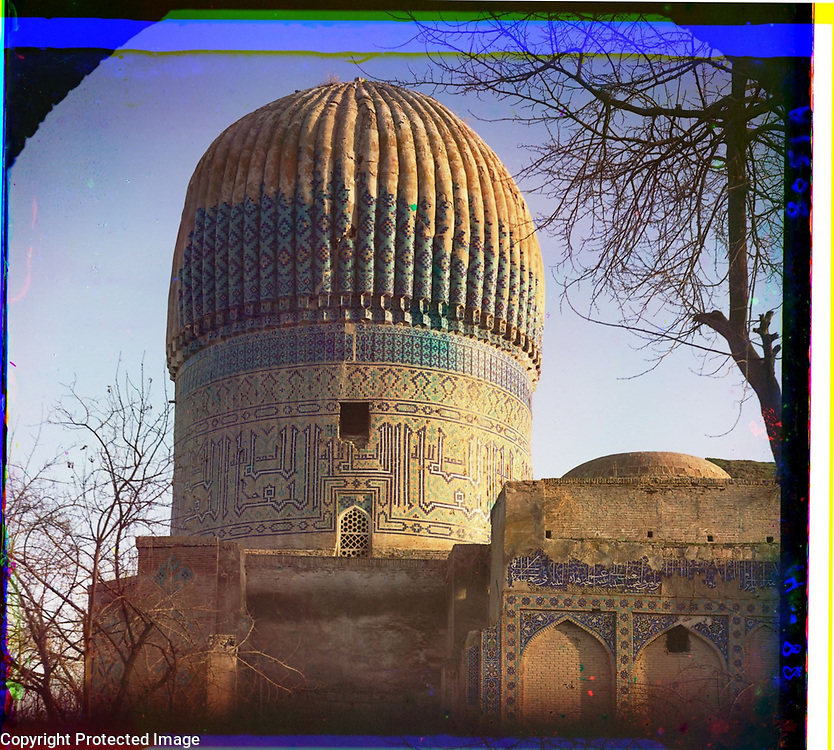