1868
This photograph of the Nadir Divan-Begi Madrasah in Samarkand (Uzbekistan) is from the archeological part of Turkestan Album. The six-volume photographic survey was produced in 1871-72 under the patronage of General Konstantin P. von Kaufman, the first governor-general (1867-82) of Turkestan, as the Russian Empire’s Central Asian territories were called. The album devotes special attention to Samarkand’s Islamic architectural heritage. Located next to the Khodzha Akhrar shrine, this madrasah (religious school) was completed in 1631 by Nadir Divan-Begi, vizier to the Bukharan ruler Imam-Quli Khan. The madrasah was planned as a rectangular courtyard enclosed by a one-story arcaded cloister for scholars and a mosque at one end. This view shows three cells (khujras) on the left side of the south cloister. Each arched cell has a lattice window above the low door. The standing figures give an idea of the scale. Although the facade shows major losses of ceramic ornamentation, it is clear that the arch niches, as well as the outer facade, were covered in a rich array of polychrome tiles with floral and geometric designs. The lower part of the wall was originally surfaced in stone. A brick passageway elevates the arcade from the cobbled courtyard. On the far right is the edge of the iwan arch at the center of the south cloister. 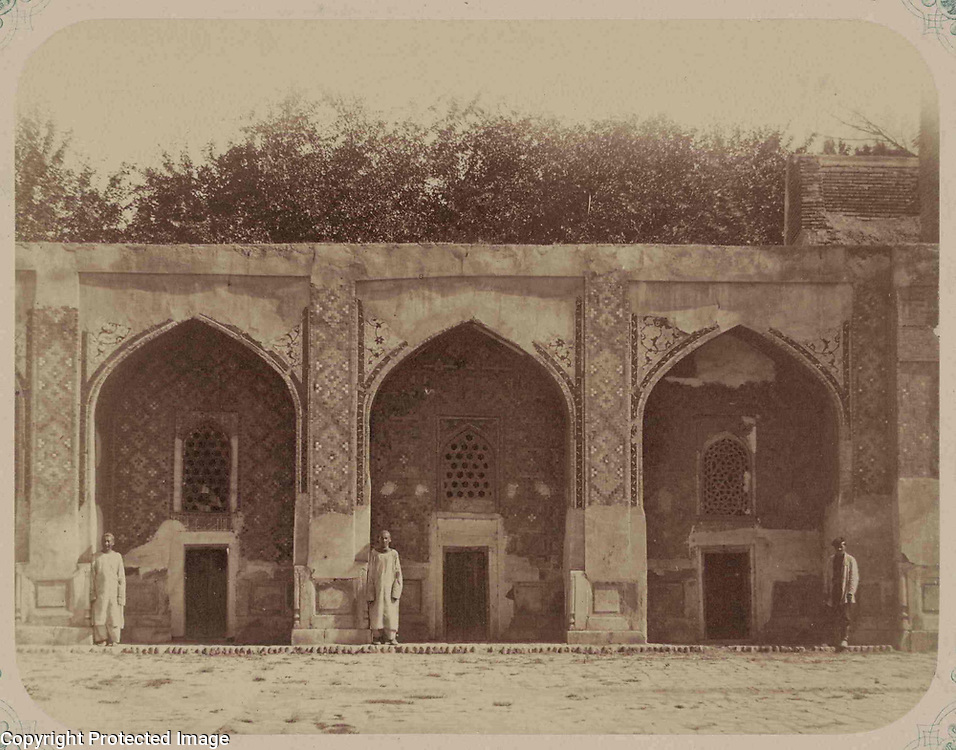