Samarkand. Portion of Shir-Dar Minaret and Its Dome with Tillia-Kari

1905
At the center of Samarkand is the Registan complex, composed of three major monuments of the madrasah (religious school). Seen here is the Shir Dar Madrasah, built in 1619–36 during the Bukhara Ashtrakhanid dynasty. This view shows part of the main facade and imposing entrance arch, or iwan (on right), with a flanking minaret, behind which is a ribbed dome over an instruction hall. Despite structural damage, the ceramic work is relatively well preserved. The minaret displays geometric figures integrated with words in block Kufic script from the Kalima, or Islamic declaration of faith. The cylinder supporting the dome contains intricate inscription bands as well as faience panels. The image is by Russian photographer Sergei Mikhailovich Prokudin-Gorskii (1863–1944), who used a special color photography process to create a visual record of the Russian Empire in the early 20th century. Some of Prokudin-Gorskii’s photographs date from about 1905, but the bulk of his work is from between 1909 and 1915, when, with the support of Tsar Nicholas II and the Ministry of Transportation, he undertook extended trips through many parts of the empire. Prokudin-Gorskii was particularly interested in the ancient city of Samarkand (in present-day Uzbekistan), which he visited on a number of occasions, including two trips in 1911. 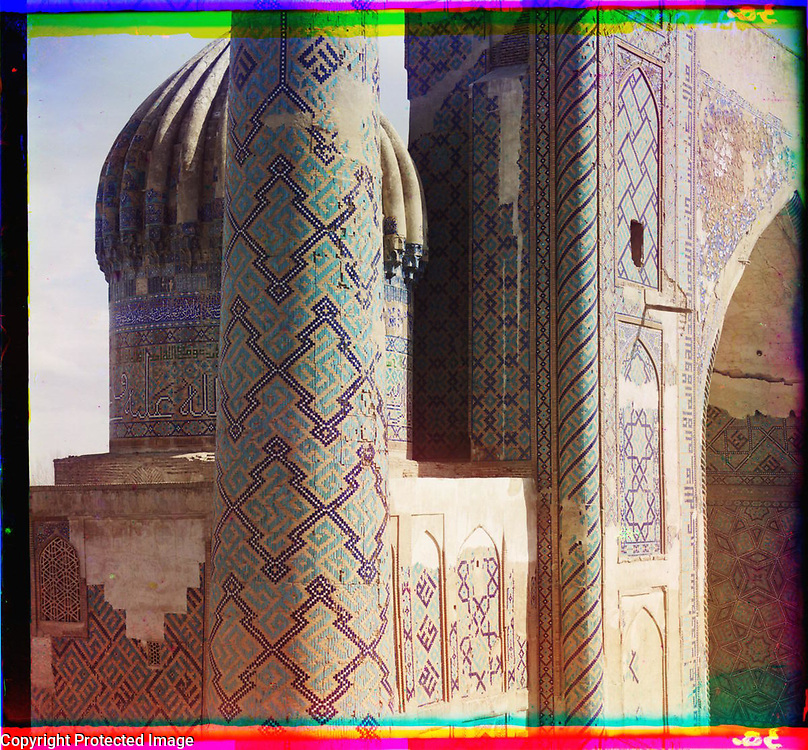