1905
This photograph of a small mosque in Samarkand (present-day Uzbekistan) combines Islamic architecture with a scene of traditional life. The view resembles the Hodja-Nisbatdor Mosque (specific information is not provided in the caption), a 19th-century structure not far from Registan Square. Built of stuccoed adobe brick, the mosque has an open iwan portico, supported by carved wooden columns on marble bases and culminating in an ornamental cornice. Visible on the left is the mihrab niche, showing the direction to Mecca. A turbaned figure is seated in a quilted robe on the steps, and another stands to the right. Although the shadows obscure the detail, the water in the foreground could be in a small pool. Such pools were often situated near these small mosques in a park setting. The image is by Russian photographer Sergei Mikhailovich Prokudin-Gorskii (1863–1944), who used a special color photography process to create a visual record of the Russian Empire in the early 20th century. Some of Prokudin-Gorskii’s photographs date from about 1905, but the bulk of his work is from between 1909 and 1915, when, with the support of Tsar Nicholas II and the Ministry of Transportation, he undertook extended trips through many different parts of the empire. Prokudin-Gorskii was particularly interested in recently acquired territories of the Russian Empire such as Turkestan, which he visited in 1907 and twice in 1911. 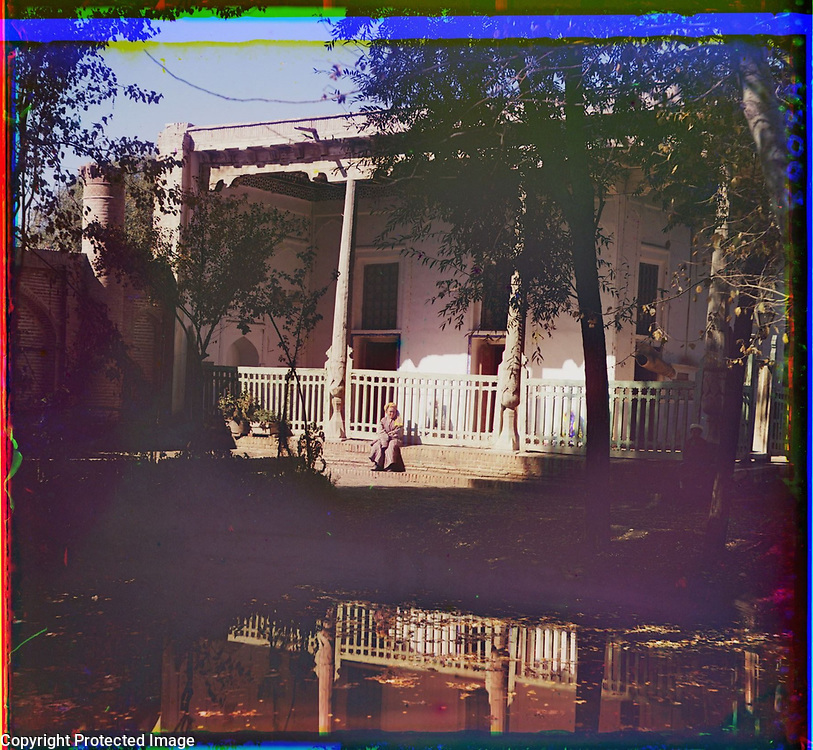