Antiquities of Samarkand. Mausoleum of Emir Timur Kuragan. View of the Northwest Facade of the Mausoleum

1868
This magnificent photograph of the Gur-Emir mausoleum in Samarkand (Uzbekistan) is from the archeological part of Turkestan Album. The six-volume photographic survey was produced in 1871-72 under the patronage of General Konstantin P. von Kaufman, the first governor-general (1867-82) of Turkestan, as the Russian Empire’s Central Asian territories were called. The album devotes special attention to Samarkand’s Islamic architectural heritage, including Gur-Emir (Persian for "tomb of the ruler"). Although known primarily as the burial place of Timur (Tamerlane), Gur-Emir was begun by Timur in 1403 to commemorate the death of his beloved grandson, Muhammad Sultan. With Timur’s own burial there in 1405, Gur-Emir became in effect the mausoleum of the Timurids. This northwest view (the original photographic title, calling this an east view, is incorrect) of the mausoleum includes a corner of the north iwan (vaulted hall, walled on three sides, with one end open) arch (far left). Despite major damage over the centuries in this active seismic zone, the central part of the ensemble remains, including the drum and great ribbed dome with ceramic tile cladding. The drum has monumental inscriptions in elongated Perso-Arabic script, while the minaret shows block Kufic script forming words from the Islamic proclamation of faith. Fragments of polychrome ceramic ornamentation are visible throughout the structure. To the right is a side view of the enormous main arch on the west side of the mausoleum. 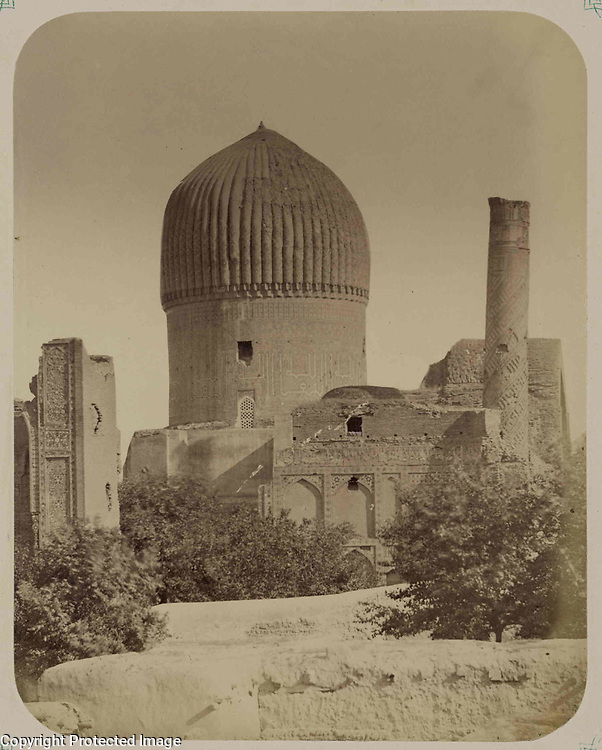