Antiquities of Samarkand. Palace of the Bukharan Emirs, "Kok Tash." View of the Entrance to the Reception Hall (from the Courtyard)

1868
This photograph of the gateway to the palace of the emirs of Bukhara in Samarkand (Uzbekistan) is from the archeological part of Turkestan Album. The six-volume photographic survey was produced in 1871-72 under the patronage of General Konstantin P. von Kaufman, the first governor-general (1867-82) of Turkestan, as the Russian Empire’s Central Asian territories were called. The album devotes special attention to Samarkand’s Islamic architectural heritage. This view of the pointed entrance arch is taken from inside the courtyard of the ceremonial palace of the emirs, who ruled Samarkand after the expulsion of the Timurids in the early 16th century. The palace was referred to as “Kok Tash” after the legendary throne of Timur (Tamerlane), who built a citadel in Samarkand. The open rectangular design, with high walls of sun-dried brick, created a columned courtyard that accommodated audiences on official occasions. The monolithic stone vessel in the foreground held water for the cleansing of hands. Visible in the background is one of the buildings in the palace compound. In 1868, Samarkand was captured by Russian forces led by von Kaufman. His conciliatory policy toward the local population and its elite is reflected in this album project, which also conveyed to the tsar the monumental grandeur of the ancient culture brought into the domain of the Russian Empire. 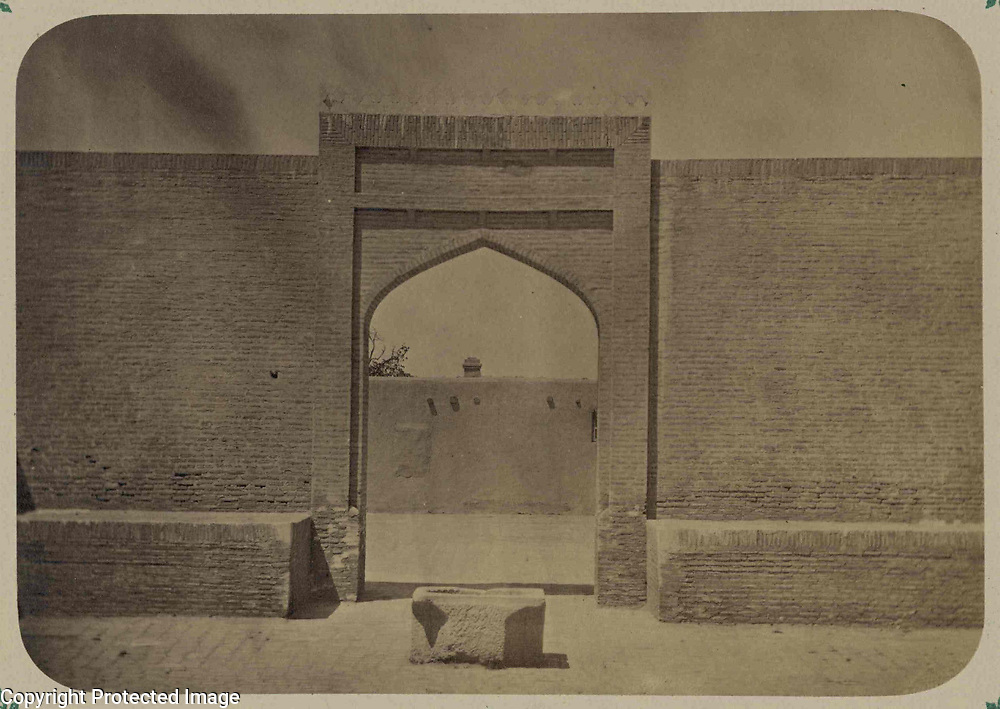