Detail of Shir-Dar (inside, to the Right of the Entrance). Samarkand

1905
In the center of Samarkand is the Registan complex, consisting of three madrasah (religious schools). The second madrasah is the Shir-Dar, built in 1619–36 during the Bukhara Astrakhanid dynasty. Rectangular in plan, the two-story arcaded structure contained scholars’ cells along an interior courtyard. This view shows the remarkable ceramic decoration on the courtyard side of the main iwan arch. Panels of Perso-Arabic inscriptions in the cursive Naskh manner are set within strips of floral motifs. Especially notable is the faience mosaic in the center, with a vase supporting the intricate figure of a bush, or tree of life. Remnants of a similar design are visible on the inner face of the arch (on left). All the figures are surrounded by intertwined tendrils. The image is by Russian photographer Sergei Mikhailovich Prokudin-Gorskii (1863–1944), who used a special color photography process to create a visual record of the Russian Empire in the early 20th century. Some of Prokudin-Gorskii’s photographs date from about 1905, but the bulk of his work is from between 1909 and 1915, when, with the support of Tsar Nicholas II and the Ministry of Transportation, he undertook extended trips through many different parts of the empire. During a trip in 1911 he gave special attention to the Islamic architecture of Samarkand (present-day Uzbekistan). 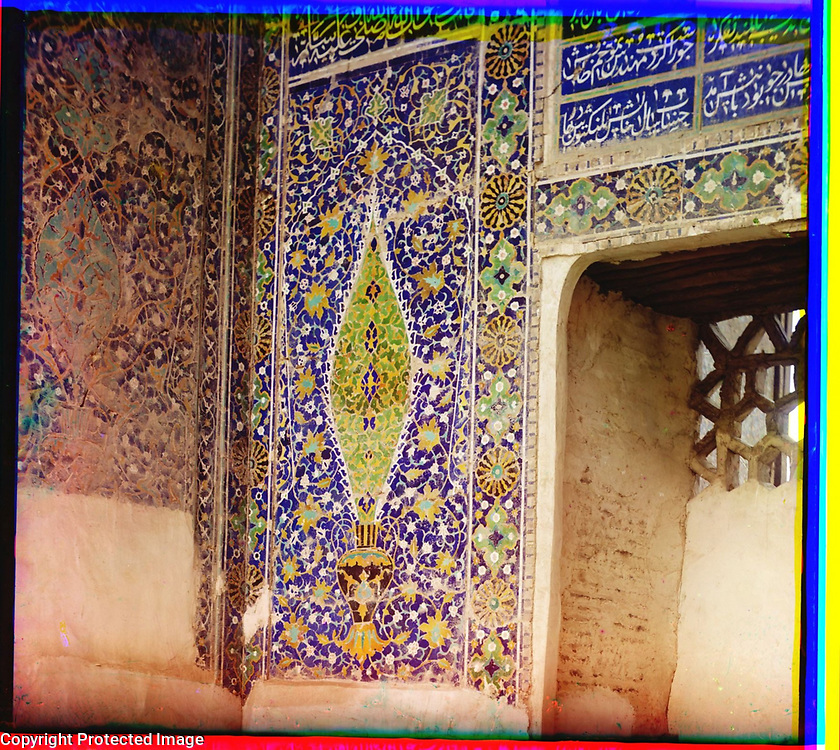