Antiquities of Samarkand. Madrasah of Bibi Khanym. View of the Main Entry from the Exterior

1865
This photograph of the Bibi Khanym entrance structure in Samarkand (Uzbekistan) is from the archeological part of Turkestan Album. The six-volume photographic survey was produced in 1871-72, under the patronage of General Konstantin P. von Kaufman, the first governor-general (1867-82) of Turkestan, as the Russian Empire's Central Asian territories were called. The album devotes special attention to Samarkand’s Islamic architecture, such as 14th- and 15th-century monuments from the reign of Timur (Tamerlane) and his successors. Built in 1399-1405 with the spoils of Timur’s campaign in India, the Bibi Khanym ensemble was designated the city’s main mosque and named in homage to Timur’s senior wife, Sarai Mulk Khanym (bibi meaning “lady” or “mother”). Intended to be one of the largest mosques in the Islamic world, the ensemble included not only the main mosque and flanking mosques, but also a grand structure that served as an entrance to the primary courtyard. Despite damage from seismic activity over the centuries, the monumental entrance arch still stands within the hulk of the ruined flanking towers, whose brick walls show the remains of tile decoration in geometric patterns. This view is taken from the exterior of the ensemble, with the dome of a secondary mosque visible in the courtyard through the arch. A corner of the main mosque is at the far right. 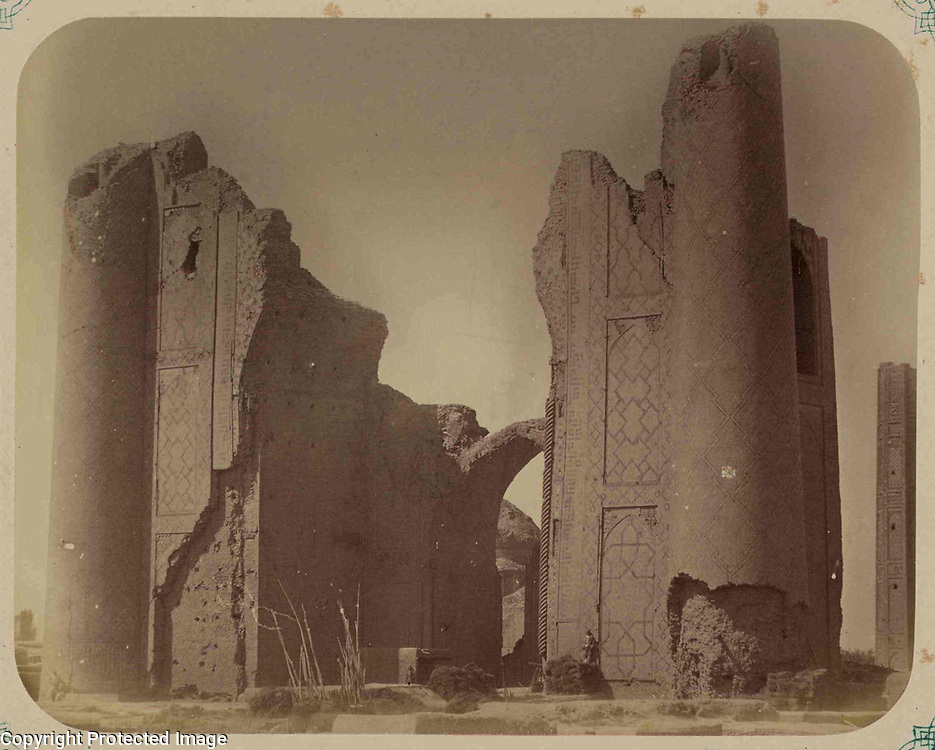